Johannesburg – South Africa’s winning the rights to host the bulk of the world’s biggest radio telescope looks set to clash with plans to use the high-pressure pumping method fracking, which can cause earth tremors, to extract gas from its vast shale deposits. 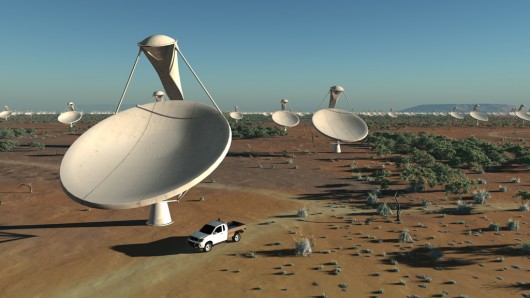 Last week, South Africa won the rights to locate about 70 percent of the “Square Kilometre Array” (SKA), a $2 billion project capable of detecting signs of extraterrestrial life in the far reaches of the universe.

The project will bring the construction of more than a thousand highly sensitive receptors spread across hundreds of kilometres of arid terrain in the Northern Cape province.

The area is subject to an astronomy law that prohibits activity interfering with star gazing, which could include hydraulic fracturing, or “fracking” – where drillers blast large amounts of sand and water laced with chemicals deep underground to free natural gas and oil from shale deposits.

“There is no decision by government on that (fracking). We must understand the science before any licence is given, but I will use the astronomy advantage act if necessary,” Science Minister Naledi Pandor told a news conference last week.

The Astronomy Geographic Advantage Act of 2007, meant to bolster South Africa’s bid for the array, gives the Science Ministry a mandate to cut down trees, re-route air flights, silence radio signals and prohibit anything that harms astronomy in the region.

The area is home to gas reserves now being investigated by energy company Royal Dutch Shell and petrochemical group Sasol.

According to an initial study commissioned by the US energy information administration, South Africa has 485 trillion cubic feet of technically recoverable shale gas resources, most of which are located in the Karoo Basin.

The amount is the fifth largest of 32 countries included in the study and is pitched as a long-term solution for the energy problems of Africa’s largest economy.

“The SKA will be situated in our licence application area,” Janine Nel, a spokeswoman for Shell South Africa Upstream, said.

“We will comply with legislation in this regard and ensure that any future exploration activities we may undertake respect these regulations.”

Environmentalists and other critics say fracking, which has made available major new unconventional sources of gas and transformed the US energy sector, can cause earth tremors and contaminate water. The process is banned in several countries.

Independent energy industry analyst Chris Yelland said South Africa is committed to the telescope project and it is up to scientists and engineers to see if fracking can co-exist with it.

“No one can give a definitive answer at this point on whether it is possible,” Yelland told Reuters.

About a year ago, South Africa imposed a fracking moratorium on oil and gas exploration licences in the semi-arid region to gain time to examine the concerns of environmentalists who say the process would ruin the area and to study the potential gains.

Energy Ministry officials were not immediately available for comment.

The telescope project will take years to build and the government appears in no rush to see how it will apply its astronomy law on mining and fracking.

When completed in 2024, the telescope will be made up of 3,000 dishes, each 15 metres wide, together with many more antennae, that together will give a receiver surface area of a square kilometre.

The bulk of the project will be in South Africa and partner African countries. Australia and New Zealand also won the rights to host a smaller portion of the project.

Scanning the sky 10,000 times faster and with 50 times the sensitivity of any other telescope, it will be able to see 10 times further into the universe and detect signals that are 10 times older. – Reuters

While the SKA will undoubtedly have a significant environmental impact  on the Karoo’s sensitive ecosystems, it will be far less serious than the proposed ‘fracking’ activities in the area.  Fracking uses a vast amount of water; South Africa and particularly the Karoo is water scarce.  Furthermore, fracking would not only use up precious ground water but the process has been shown to contaminate both surface and groundwater, making it unfit for human and animal consumption.  Hopefully the SKA project will prevent fracking from happening in the Karoo and that fossil fuels can be phased out in  the coming decades.