Britain is facing a water shortage crisis this year, with the government this week officially declaring the south east of England to be in drought. Metro asks what the coming months have in store as the water companies tell us turn off our taps… 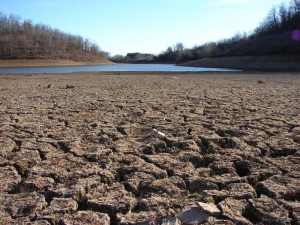 For Britons of a certain age, the mere mention of the year 1976 evokes fond memories of a summer spent playing in the streets with their mates in the sweltering heat.

The year is synonymous with sun, bringing temperatures that peaked at just below 36C (96F), as some areas went 45 days without rain.

But for those in charge of Britain’s water, 1976 triggers nothing but fear. It was a time when widespread water rationing was in force, while in some areas standpipes in the streets provided water in restricted amounts as main supplies to homes were turned off. Levels of rivers and reservoirs dropped dramatically.

And 36 years later, following an announcement this week that the south east of England is officially tackling drought, they are taking no chances of a repeat.

‘The situation on the ground across much of south east England isn’t quite as bad as 1976 but it’s very close,’ said Trevor Bishop, head of water resources at the Environment Agency.

‘We’ve had two dry winters in a row which is quite unusual. There has been very little recharge, which means the winter rainfall we rely on to top up our reservoirs and our groundwater for the summer periods, when demands for water are at their highest, simply haven’t occurred.’

In January, the south east experienced just two-thirds of the average rainfall expected for that month, while rainfall in the Thames Valley and London areas has been below average for almost all of the past two years. Rivers across the region are drying up. The situation led to a summit earlier this week that included water companies, farmers and wildlife groups.

After the meeting, the government declared an official drought in the south east. Will things get as bad as they were 36 years ago?

Mr Bishop believes the current drought is serious but the situation can be overcome.

‘In 1976, after about May, daily temperatures averaged at about 27C (80F). That is quite phenomenal.

‘So the probability of those really high temperatures this spring and summer is quite low but the potential is there of course for that to happen. What we’re doing is planning for the worst and hoping for the best.’

He continues: ‘In 1976 we had standpipes on the streets. But we’ve had billions of pounds of investment in water infrastructure in the last couple of decades so there’s a lot more resilience in-built in the system than there was three decades ago. So even with that situation we should not be seeing things such as standpipes. What we quite possibly will see are restrictions on household use.’

Water companies are already putting these restrictions into operation by asking customers to be more careful about how much they use.
This could involve showering for less than four minutes, turning off the tap while brushing your teeth and only putting a full load in a washing machine before turning it on.

Outdoor usage is also a concern – the Environment Agency says turning on a hosepipe for one hour consumes the same amount of water that a family of four would use over a weekend.

A hosepipe ban, which would be set by the water companies themselves under a statutory drought plan, looks inevitable.

Water-saving habits should be adopted whether or not there is a drought or a water shortage crisis.  If a country like England that is known for its high rainfall and good water resources can be facing a water crisis, what about inherently water-stressed countries such as South Africa?  South Africa is currently facing a water crisis of its own and we are not even in a drought period.  Households and businesses should be installing water conservation systems and water tanks to mitigate the water crisis.  Water tanks, such as easily installed poly or plastic water tanks can be used to collect rainwater and for storing water for emergency use.