Time Magazine has revealed its 50 top innovations of 2010. These include inventions spanning across several categories. 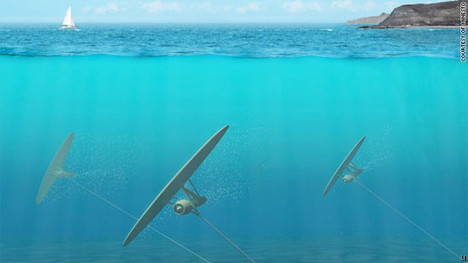 Here is a summary of Time’s best green energy inventions of 2010:

1. Deep Green Underwater Kite: The turbine, known as “Deep Green” was developed by Minesto, a privately-owned Swedish/UK company. Deep Green is tethered 100 meters above the sea bottom. It has a wingspan of 12 meters and a turbine one meter in diameter. The “kite” comprises a wing with a rudder to steer the turbine to face in the direction that will allow it to capture the maximum amount of tidal energy. Since seawater is 800 times as dense as air, it can generate 800 times more energy than if it were in the sky. It can generate up to 500 kW of electricity even in calm seas. The kite flies in a figure eight and travels 10 times faster than the water it is tethered in. The company believes the design could increase the market for tidal power by 80%. The first scale model will be unveiled next year off the coast of Northern Ireland.

2. Body Powered Devices: One device convert body heat into electricity and it involves the use of nano-technology. Forbes called this a “breakthrough technology”. Dancefloor Power was developed by Michael McAlpine and his collegues at Princeton University. Their device turn locomotion into power by embedding piezoelectric crystals into a flexible, biocompatible rubberlike material that, when bent, allows the crystals to produce energy. Put the crystals in shoes, or implant them directly into the body and they could produce enough power to charge personal electronics or internal medical devices. Telecommunications provider Orange introduced a prototype of Orange Power Wellies — rubber boots that convert heat into current. Campers at Britain’s Glastonbury Festival were the first to demo the footwear. (With the current model, it takes 12 hours of walking to charge a cell phone for an hour.) In Paris, engineers have captured the warmth generated by bodies on the Métro subway to heat a public-housing project. By 2011, the Métro heating system will cut carbon dioxide emissions from the housing project’s heating system by a third.

3. Power Aware Cord: The Interactive Institute, a Swedish nonprofit that explores technology and design has developed the Power-Aware Cord. It embeds wires around a cable that pulse light in relation to how much electricity is being drawn off the grid. The more current, the brighter and faster the blue light spirals. In testing the device, researchers found that making the invisible visible helped consumers to decrease their power usage.

4. Bloom Box: Cost is the problem commonly associated with hydrogen fuel cells. The Bloom Box is a much less expensive, it generates electricity using solid oxide fuel cells, which provide power by oxidizing a fuel source. The fuel source is natural gas, though the company hopes to substitute cleaner sources in the future. About half the size of a shipping container Silicon Valley companies like Google and eBay are already using Bloom Boxes for greener backup power, at a cost of about $800,000 each.

5. The (Almost) Waterless Washing Machine: The Xeros process was invented by Stephen Burkinshaw, it uses one cup of water, detergent and 20 kg (or 44.092 lb) of plastic chips per load. The plastic chips supposedly do most of the work by removing and absorbing dirt and even stains. A typical washing machine uses about 35 kilograms of water for every kilogram of clothes, in addition to the power needed to heat the water and dry the clothes. A commercial version is due out next year. [Click here for an earlier post on the Xeros]

Richard Matthews is a consultant, eco-entrepreneur, sustainable investor and writer. He is the owner of THE GREEN MARKET, one of the Web’s most comprehensive resources on the business of the environment. He is also the author of numerous articles on sustainable positioning, green investing, enviro-politics and eco-economics.

Green technology will hopefully gain momentum and gradually replace environmentally damaging technology, especially in the field of energy generation.  Perhaps the continued rise in crude oil price is a blessing as it will make renewable energy options more competitive and incentivize investment in more green tech inventions and projects.

Top 10 air purifying house plants
Do You Know The Environmental Cost Of Your Mattress?