Wetland restoration is a billion-dollar-a-year industry in the United States that aims to create ecosystems similar to those that disappeared over the past century. But a new analysis of restoration projects shows that restored wetlands seldom reach the quality of a natural wetland. 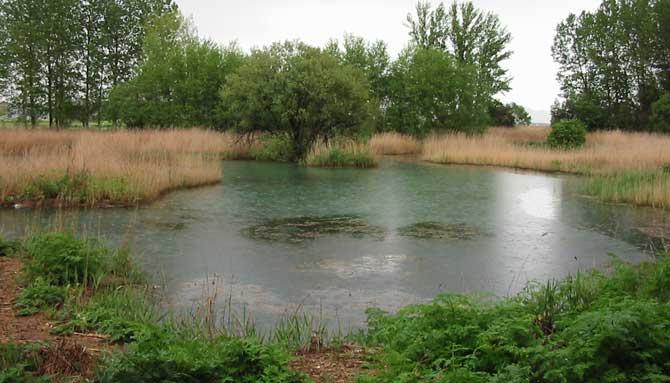 Restored wetlands like this pond converted from agricultural use in Aragon, Spain, may look natural, but a new study shows that it can take hundreds of years for restored wetlands to accumulate the plant assemblages and carbon resources of a natural, undamaged wetland. (Credit: David Moreno-Mateos/UC Berkeley)

“Once you degrade a wetland, it doesn’t recover its normal assemblage of plants or its rich stores of organic soil carbon, which both affect natural cycles of water and nutrients, for many years,” said David Moreno-Mateos, a University of California, Berkeley, postdoctoral fellow. “Even after 100 years, the restored wetland is still different from what was there before, and it may never recover.”

Moreno-Mateos’s analysis calls into question a common mitigation strategy exploited by land developers: create a new wetland to replace a wetland that will be destroyed and the land put to other uses. At a time of accelerated climate change caused by increased carbon entering the atmosphere, carbon storage in wetlands is increasingly important, he said.

“Wetlands accumulate a lot of carbon, so when you dry up a wetland for agricultural use or to build houses, you are just pouring this carbon into the atmosphere,” he said. “If we keep degrading or destroying wetlands, for example through the use of mitigation banks, it is going to take centuries to recover the carbon we are losing.”

The study showed that wetlands tend to recover most slowly if they are in cold regions, if they are small — less than 100 contiguous hectares, or 250 acres, in area — or if they are disconnected from the ebb and flood of tides or river flows.

“These context dependencies aren’t necessarily surprising, but this paper quantifies them in ways that could guide decisions about restoration, or about whether to damage wetlands in the first place,” said coauthor Mary Power, UC Berkeley professor of integrative biology.

Moreno-Mateos, Power and their colleagues will publish their analysis in the Jan. 24 issue of PLoS (Public Library of Science) Biology.

He found, however, that restored wetlands contained about 23 percent less carbon than untouched wetlands, while the variety of native plants was 26 percent lower, on average, after 50 to 100 years of restoration. While restored wetlands may look superficially similar — and the animal and insect populations may be similar, too — the plants take much longer to return to normal and establish the carbon resources in the soil that make for a healthy ecosystem.

Moreno-Mateos noted that numerous studies have shown that specific wetlands recover slowly, but his meta-analysis “might be a proof that this is happening in most wetlands.”

Moreno-Mateos, who obtained his Ph.D. while studying wetland restoration in Spain, conducted a meta-analysis of 124 wetland studies monitoring work at 621 wetlands around the world and comparing them with natural wetlands. Nearly 80 percent were in the United States and some were restored more than 100 years ago, reflecting of a long-standing American interest in restoration and a common belief that it’s possible to essentially recreate destroyed wetlands. Half of all wetlands in North America, Europe, China and Australia were lost during the 20th century, he said. S

Though Moreno-Mateos found that, on average, restored wetlands are 25 percent less productive than natural wetlands, there was much variation. For example, wetlands in boreal and cold temperate forests tend to recover more slowly than do warm wetlands. One review of wetland restoration projects in New York state, for example, found that “after 55 years, barely 50 percent of the organic matter had accumulated on average in all these wetlands” compared to what was there before, he said.

“Current thinking holds that many ecosystems just reach an alternative state that is different, and you never will recover the original,” he said.

In future studies, he will explore whether the slower carbon accumulation is due to a slow recovery of the native plant community or invasion by non-native plants.

Coauthors with Moreno-Mateos and Power are Francisco A. Comin of the Department of Conservation of Biodiversity and Ecosystem Restoration at the Pyrenean Institute of Ecology in Zaragoza, Spain; and Roxana Yockteng of the National Museum of Natural History in Paris, France. Moreno-Mateos recently accepted a position as the restoration fellow at Stanford University’s Jasper Ridge Biological Preserve.

Property developers in South Africa often exploit environmental impact assessment mitigation recommendations by destroying a natural wetland and then creating an artificial wetland somewhere else.  This disingenuous practice is even condoned and recommended by some prominent South African professional environmental assessment practitioners.  South Africa can ill afford to lose more wetlands to avaricious developers.  World Wetlands Day will be celebrated on Thursday 2 February 2012. This will celebrate the 41st anniversary of the Ramsar Convention, an intergovernmental treaty signed on 2 February 1971 in Iran for the protection of wetlands worldwide. 160 countries have since signed the treaty.