5 Ways Your Green Habits Are Saving the Environment

To simplify complex technology, automakers and engineers use a variety of specialized terminology and acronyms when discussing today’s environmentally-friendly vehicles. 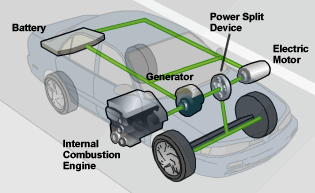 ng, a vehicle loses all or most of the forward motion (kinetic energy) that has been created during acceleration. To capture as much of this lost energy as possible, hybrid electric vehicles (HEVs) utilize regenerative braking to convert this kinetic energy into electricity. The process, which uses the vehicle’s electric motor as a generator to push electricity back into the storage battery, is completely automatic. As an added benefit, with less energy being converted directly into frictional heat in the vehicle’s brakes (as it is with conventional vehicles), there is less wear on brake pads and other braking components.

Start-Stop Technology — to reduce fuel consumption and vehicle emissions, start-stop technology electronically shuts down an internal combustion engine (ICE) while a vehicle is stopped. Completely automatic in operation, vehicle accessories (e.g., headlights, air conditioning, and audio system) and safety systems remain powered by the battery while the engine is off. When the driver lifts their foot of the brake pedal, the engine restarts immediately to reduce any unnecessary delay in the engine’s operation.

Green Vehicle — a term commonly used to describe a passenger vehicle that produces reduced emissions when compared to a traditional internal combustion vehicle (ICE). Green vehicles include those which utilize hybrid technology, electric technology, or alternative fuels for propulsion.

ICE — an “Internal Combustion Engine” burns fuel within a contained combustion chamber. Most ICEs burn gasoline or diesel fuel to produce power, but others use natural gas, ethanol, or even used cooking oil. A small battery is used to start the ICE, but that battery is not able to propel the vehicle’s wheels. More than 99.9 percent of all vehicles on the road today use ICE powerplants. (An example of a vehicle with an ICE is the Toyota Corolla.)

BEV — a “Battery Electric Vehicle” does not have an internal combustion engine (ICE). Instead, the vehicle is propelled by one or more electric motors that are powered by electricity from the vehicle’s batteries. As a BEV has no way of replenishing its own power (other than a limited amount from regenerative braking), so the vehicle must be plugged into an electrical source when the batteries are low or depleted. A typical BEV has a range of 100 to 250 miles before its batteries are depleted. (An example of a BEV is the Nissan Leaf.)

ER-EV — an “Extended-Range Electric Vehicle” is designed to overcome the battery-limited range on BEVs (Battery Electric Vehicles). Like the BEV, the ER-EV has a battery pack that sends electricity to motors that drive the wheels. However, when the batteries are low, an on-board internal combustion engine (ICE) will run to charge the batteries (the ICE does not send power directly to the drive wheels). Like a BEV, the ER-EV stores enough electricity to deliver a range of 100-250 before its batteries are depleted. (An example of an ER-EV is the Chevrolet Volt.)

Hydrogen Vehicle — a hydrogen vehicle burns flammable hydrogen gas within the engine. Combustion takes place within the cylinders of a modified, gasoline-burning power plant called a “bivalent” engine (defined as an engine which can use two fuel types). The hydrogen fuel is stored in liquid form (in heavily insulated on-board tanks that must be kept colder than -423°F) until it is needed by the engine. Unfortunately, hydrogen gas doesn’t contain as much energy density as gasoline, so fuel economy is lower when the vehicle is running on clean hydrogen power. However, a vehicle may extend its range by reverting back to burning gasoline. (An example of an FCEV is the BMW Hydrogen 7.)

FCEV — a “Fuel Cell Electric Vehicle” consumes hydrogen gas as a fuel, but not in the same manner as a “Hydrogen Vehicle.” Instead of burning the flammable hydrogen in a combustion chamber, the hydrogen gas, stored in on-board tanks at room temperature, is fed into a fuel cell. The fuel cell combines hydrogen with oxygen (pulled from the atmosphere) in a chemical process that produces electricity. The electricity is used to power one or more electric motors to propel the vehicle. While not required for operation, most FCEVs are also equipped with a regenerative braking system and a small battery pack. This allows the vehicle to store a small amount of electricity to run at lower speeds in electric-only mode, mimicking an EV. (An example of an FCEV is the Mercedes-Benz F-Cell.)

HEV — A “Hybrid Electric Vehicle” has an internal combustion engine (ICE), a battery pack (nickel metal hydride or lithium ion) to store electricity, and one or more electric motors to propel the vehicle. The ICE typically burns gasoline (often called a “gasoline hybrid-electric vehicle”) or diesel (“diesel hybrid-electric vehicle”) for fuel. The battery packs are recharged by the ICE, or through regenerative braking from the wheels. An HEV may travel limited distances, at slow speeds, under electric power alone. However, the ICE will assist the battery packs in powering the vehicle under significant load conditions, such as during heavy acceleration or climbing a hill. (An example of an HEV is the Toyota Prius.)

PHEV — A “Plug-In Hybrid Electric Vehicle” is similar to a hybrid vehicle, meaning it has an internal combustion engine, a battery pack, and one or more electric motors to propel the vehicle. However, while a HEV must rely on its combustion engine (or regenerative braking) to replenish its battery packs, a PHEV may also be plugged into an external electricity source to charge the batteries. Most PHEV vehicles are able to travel on electric power alone for 10-30 miles before the internal combustion engine (ICE) must be used. (An example of a PHEV is the Chevrolet Volt.)