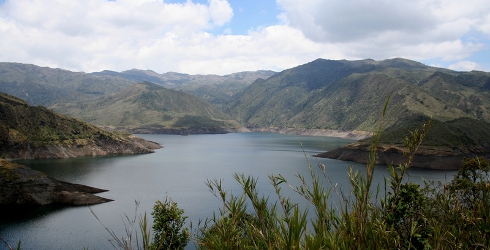 Borrowing strategies from the realm of high finance, the Nature Conservancy has created a conservation trust fund to protect rivers and watersheds in Colombia — and help provide clean drinking water to Bogotá, the country’s capital.

The fund will attract voluntary contributions from Bogotá’s water treatment facilities to subsidize conservation projects — from strengthening protected areas to creating incentives for ecologically sustainable cattle ranching — that will keep sedimentation and runoff out of the region’s rivers.

Without such projects, the facilities have to spend millions to remove those pollutants in order to provide clean drinking water for Bogotá’s 8 million residents.

The fund — based on a pilot program in Ecuador — is projected to raise $60 million for conservation projects over the next 10 years. And the Conservancy plans to implement six more such funds in South American countries in the next two years.

“The best part of this initiative is that it is voluntary and will not raise water costs for residents,” explains Samuel Moreno Rojas, mayor of Bogotá. “It will help the city save on treatment costs.”

People and Nature Will Benefit

Water treatment facilities in Bogotá could save $4 million per year by proactively investing in watershed protection, according to a study undertaken by The Nature Conservancy and its partners.

The Conservancy brought together a broad range of public and private stakeholders — many of which had never collaborated before — to navigate complex regulations and broker the landmark agreement.

All these efforts culminated on April 16, 2008, when Mayor Rojas and dozens of other community and business leaders gathered to launch the new water fund.

A Growing Fund for Water

The Conservancy led the development of the first such water fund in Quito, Ecuador, in 2000. From a modest $10,000 start-up investment, that fund has already reached $6 million in capital and will disperse $900,000 this year for conservation in watersheds that supply drinking water for Quito’s 2 million residents.

Conservancy donors in the United States provided the seed money that enabled in-country staff to launch both of these funds.

“The Nature Conservancy in Maine believed in us, and that ultimately made this project possible,” says Aurelio Ramos, director of the Conservancy’s NTA program and architect of the Bogotá Water Fund.

In 2007, donors in Maine contributed $50,000 in seed money to the NTA Program, enabling Ramos to put a grand vision into action.

“People in Maine understand the connection between forest health and water quality,” says Michael Tetreault, state director of The Nature Conservancy in Maine.

“And with projects like the Penobscot River Restoration underway here, there’s an appreciation for the need to work at large scales.”

The Conservancy will work to grow the Bogotá water fund by securing additional investments from national agencies.

The fund will be managed by a board, which will include representatives from the Conservancy, the water companies and other stakeholders, including Bavaria, a brewery and one of the biggest private companies in Colombia.

Bavaria donated $150,000 to start up the fund. Guidelines are also being developed for how funds will be dispersed and overseen.

“Our priorities align well with the other stakeholders actively participating in the implementation of the fund, such as the Ministry of Environment, Colombia’s National Parks Service and the Patrimonio Natural Foundation,” explains José Yunis, the Conservancy’s top representative in Colombia.

“We’re expecting to support a diverse array of projects, including adding park rangers, strengthening protection in parks, and helping people who live in sensitive areas to switch to more ecologically sound livelihoods.”

For example, grants can enable ranching families to switch to ecologically sustainable operations by underwriting the purchase of higher quality cattle and other start-up costs if they commit to long-term conservation agreements to preserve their natural areas.

More milk from fewer cows means that ranchers will be less likely to clear forest land for additional grazing fields — resulting in less sedimentation in rivers.

“In financial terms and in actual conservation results, these funds yield a tremendous return on investment,” says Ramos.

This type of programme is sorely needed in many African countries, including South Africa.  African rivers are polluted by the poor and big business alike resulting in human suffering and environmental degradation downstream.  A sad example is the Olifants River in South Africa; the Olifants is highly contaminated from upstream pollution and has resulted in crocodile die-offs and damage to ecosystems in the Kruger National Park.

How Large is Your Ecological Footprint & How Can You Reduce it?
Do we have a right to clean, fresh water?