10 Things That Will Change How You Think About Water

Want to go green? Don’t fall for these common myths:

The operator of Japan’s crippled nuclear plant said Wednesday it was still working on a detailed plan to end the country’s nuclear crisis a month after it began, as tests showed radiation levels in the sea near the complex had spiked. 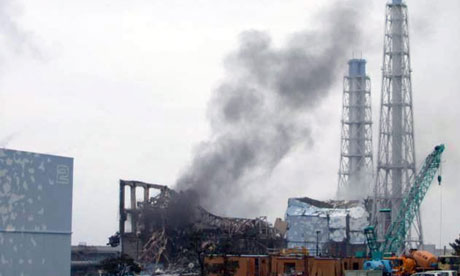 Engineers moved a step closer to emptying highly radioactive water from one of the six crippled reactors, which would allow them to start repairing the cooling system crucial to regaining control of the reactors.

Radiation in Tokyo, 240 km (150 miles) from the plant, had fallen to pre-disaster levels Tuesday, the science ministry said late Wednesday.

A series of strong aftershocks this week has rattled eastern Japan, slowing the recovery effort at the Fukushima Daiichi plant due to temporary evacuations of workers and power outages.

The beleaguered president of operator Tokyo Electric Power Co (TEPCO) said the situation at the nuclear plant, wrecked by a 15-meter tsunami on March 11, had stabilized.

But TEPCO president Masataka Shimizu said the firm was still preparing a blueprint to end the crisis, now rated on a par with the world’s worst nuclear accident, the 1986 Chernobyl disaster.

“As instructed by Prime Minister Kan we are working out the specific details of how to handle the situation so they can be disclosed as soon as possible,” a relaxed-looking Shimizu told a news conference in Tokyo.

Shimizu has been largely absent from the recovery operation, spending time in hospital and only visiting the area Monday. He refused to comment on public calls for his resignation, and again apologized to the Japanese people for the crisis.

“We are making the utmost effort to bring the reactors at Fukushima Daiichi to a cold shutdown and halt the spread of radiation,” he said.

TEPCO’s Tokyo head office has been the target of angry protests over the nuclear crisis and authorities took no chances Wednesday, with riot trucks and security officers guarding the front gate during the news conference.

Latest data shows much more radiation leaked from the Daiichi plant in the early days of the crisis than first thought, prompting officials to rate it on a par with the Chernobyl disaster.

But experts were quick to point out the two crises were vastly different in terms of radiation contamination, and on Wednesday, Russia’s nuclear chief said Japan was exaggerating the scope of the disaster.

“It is hard for me to assess why the Japanese colleagues have taken this decision. I suspect, this is more of a financial issue, than a nuclear one,” Sergei Kiriyenko said on the sidelines of a meeting of major economies in southern China.

There have been fears of contamination among Japan’s neighbors, but China said the impact there had been small, noting the radiation was just 1 percent of what it had experienced from Chernobyl.

The toll of the disaster is rising. More than 13,000 people have been confirmed dead, and Wednesday the government cut its outlook for the economy, in deflation for almost 15 years, for the first time in six months.

“The biggest risks, or uncertain factors for the economy, are when power supplies will recover, whether the nuclear situation will keep from worsening,” Economics Minister Kaoru Yosano said.

The total cost of the triple catastrophe has been estimated at $300 billion, making it the world’s most costly natural disaster. TEPCO said it was working on a compensation plan.

The Yomiuri newspaper reported Wednesday that the government may cap TEPCO’s liability to as little as $24 billion for damages. Bank of America-Merrill Lynch has estimated compensation claims of more than $130 billion.

Seawater samples collected Monday from around 15 km (9 miles) off the coast of Minamisoma city showed radiation in the water rose to 23 times the legal limit from 9.3 times on April 7, said Hidehiko Nishiyama, a NISA deputy director-general.

He later said NISA had asked TEPCO to assess the quake resistance of the buildings, and to look into how they could be reinforced against aftershocks.

“We need to think about how these aftershocks are affecting the buildings, which are already damaged,” he said.

Japan has expanded the 20 km (12 miles) evacuation zone around the plant because of high accumulated radiation.

No radiation-linked deaths have been reported and only 21 plant workers have been affected by minor radiation sickness.

Still, the increase in the severity level heightens the risk of diplomatic tension with Japan’s neighbors over radioactive fallout. Chinese Premier Wen Jiabao told Kan on Tuesday he was “concerned” about the release of radiation into the ocean.

“Its impact on our country’s environment has been small, equivalent to about 1 percent of the impact of the Chernobyl nuclear accident on our country,” China’s nuclear safety body said Wednesday.

“There is no need to adopt protective measures.”

Although down-played, the radiation risk from Fukushima nuclear plant is no longer negligible– globally.  The negative effects of the radiation on the environment and humans could only manifest many years from now.