What does ‘Green’ really mean? 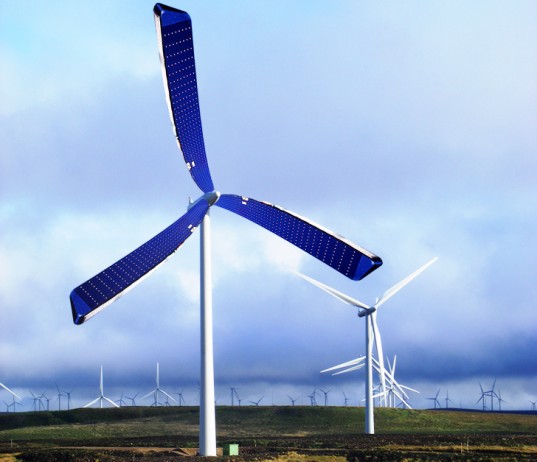 Why settle for one form of renewable energy when you can produce power with two? That’s exactly what scientists from the University of Liverpool have done by upgrading an everyday wind turbine with a new set of spinning solar blades. The team, led by Dr. Joe King, came up with the innovative solution to stymie critics who say wind turbines are “only useful when the wind is blowing” — their design doubles the functionality of traditional turbines by incorporating photovoltaic technology.

Dr. King said, “While we are no strangers to windy weather here in the UK, it can be intermittent in other regions. Solar panels may only be useful here during our ten days of summer or an occasional heatwave, but in countries such as Morocco, Italy and Spain they could make a real difference.”

However the team has faced problems. Early computer simulations found that the turbine mounted solar panels would cause blinding beams of light to shoot out across the surrounding area. There was a real concern that the turbines could potentially blind aircraft pilots as well as anyone living in the vicinity. Not just that, but on a particularly hot day the turbines would generate ‘lethal’ solar rays that could set buildings on fire if concentrated.

“The last thing we want is for our turbines to cause plane crashes and fires, so we’ve devised a ‘tinted’ solar panel that doesn’t reflect sun beams. Our early prototype looked like a massive disco ball when it is was operational, but our solution now prevents that.”

The team is now deciding where to install their prototype solar wind turbine. “Due to the poor amount of sunlight in the UK, we’re definitely looking abroad,” Dr. King said. “Personally I believe an ideal place would be Ireland. It’s close by, has strong winds, wonderful summers, plus my family live there so I can go visit!” Expect the solar wind turbine, dubbed the “Heat Waver”, to be set for a summer installation in a few months. “We still have several tests to run,” Dr. King said, “but we are confident we can transform the world’s renewable energy needs. Just think what our turbines could do in countries like Australia.”

This combined solar/wind power technology would be ideal for certain areas in South Africa too.  Water scarcity is a real issue in South Africa and many other electricity generation methods, including coal-fired and nuclear power stations, use up shocking amounts of water.  Wind energy and solar energy use practically no water for electricity generation and although these to clean energy systems do have some disadvantages, their water efficiency makes them highly desirable for water scarce nations (see Wind Power and Water Scarcity).