Call to ban shale gas exploration in the Karoo

Why Even Climate Change Skeptics Should Go Solar 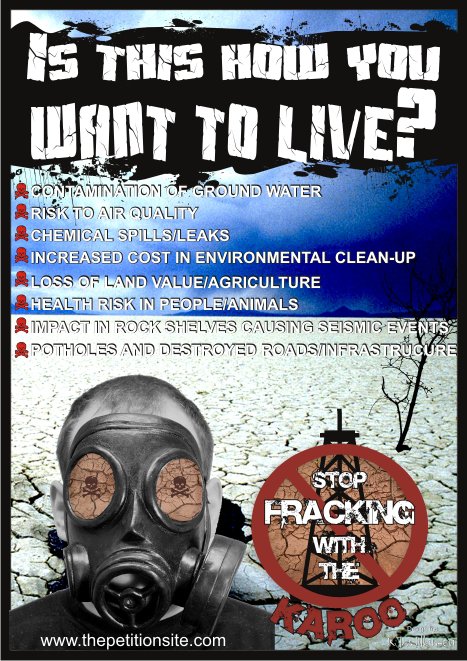 Groups opposing shale gas mining bids by Shell and other explorers in the Karoo yesterday asked the government to immediately end these plans and ban any future exploration.

Citing water as the “Achilles heel” of hydraulic fracturing (fracking) in the Karoo, the Karoo Action Group said in a review handed to the presidency that Shell’s proposed exploration alone would require between 7.2 million and 144 million litres of water.

It said Shell had been “extremely vague” as to where it would source the water in both its draft environmental management plan (EMP) and at public consultation meetings.

The Centre for Environmental Rights (CER) yesterday asked the Petroleum Agency South Africa (Pasa) to extend timeframes in Shell’s application to explore for shale gas in the south-western Karoo basin by at least another 120 days.

The CER plans to convene community workshops in the Karoo in May and June for disadvantaged and vulnerable communities about rights to participate in Shell’s application and environmental rights.

Pasa chief executive Mthozami Xiphu said yesterday that Shell had until April 14 to submit its EMP. Unresolved objections could be taken to the Regional Mining Development and Environmental Committee “for consideration and advice to the minister”. Pasa would consider the CER’s legal arguments for extension and respond within two weeks.

CER executive director Melissa Fourie said that had Shell’s application been brought under the National Environmental Management Act (Nema), rather than “outdated, inappropriate” provisions in the MPRDA, there would have been a comprehensive environmental impact assessment.

“Instead, we now have this rushed, piecemeal application for exploration rights that ignores the integrated approach to sustainable development required by Nema and the constitution, and pretends that exploration is somehow unconnected to large-scale shale gas development in an arid, ecologically sensitive part of the country.”

The review led by the Karoo Action Group said a flawed regulatory environment created an “extremely high risk” of issues falling through the cracks because of the fragmented requirements of the MPRDA and Nema, as well as permits for water, emissions and waste.

It also noted a “probable” conflict of interest for Pasa, which is mandated to both promote and regulate oil and gas exploration. The review, led by three specialists in environmental law and science, with input from another 16 experts, raised concern about a “serious lack of capacity” by the state to monitor and enforce compliance with any conditions of approval for fracking.

It highlighted “sincere and significant concerns” in the US, UK, France and Canada around the environmental and health impacts of fracking.

The review took issue with the failure of Shell’s EMP to identify specific drilling sites.

Jonathan Deal, the national co-ordinator of the Karoo Action Group, took issue with Shell’s focus on “a short-term solution that reflects the attitude of big oil and big business”. Fracking benefited “very few people – after 15 years the resource is exhausted, and they leave an absolute mess behind them”. – Business Report

Water scarcity in South Africa is a problem and is extreme in the arid Karoo.  With our growing water crisis, the Karoo shale gas exploration/’fracking’ proposals by Shell should not have even reached the stage where it is even being considered.  Hopefully the South African government will not allow any fracking activities in the Karoo or anywhere else in our country.