Why We Must Learn From The Biosphere To Build Green Economies

Why Build With Bamboo?

Rather than wreaking havoc on a tiny island in the Indian Ocean — as alien species can sometimes do — a giant tortoise appears to be helping to restore the native ecosystem. 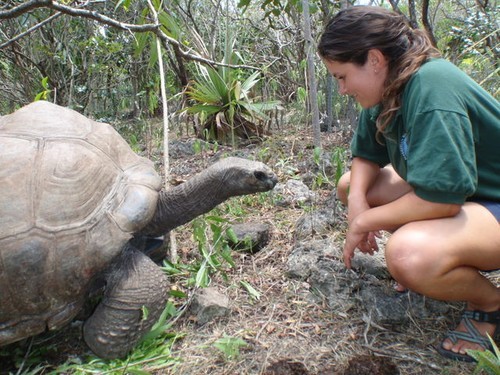 Wildlife scientists introduced Aldabra giant tortoises — which can reach up to 661 pounds (300 kilograms) — to an island, called Ile aux Aigrettes, off the coast of the island nation of Mauritius. By 2009, 19 adult giant tortoises called the island home. The tortoises were to replace the role of their extinct kin. [Extinct Giant Tortoises Could Be Revived]

Before humans first arrived on Ile aux Aigrettes, various giant tortoises lived there, as did giant skinks — a type of lizard — and, most likely, flightless dodo birds. The disappearance of these animals affected other things living on the island, in particular the native ebony trees, which have been devastated by people hunting for firewood.

The giant tortoises and the skinks ate the fruit of these trees, spreading the seeds. Without these fruit-eaters around, the trees could no longer disperse; young trees only grew directly below the adults.

Worldwide, invasive species are considered one of the greatest threats to biodiversity, so, the idea of replacing an extinct creature with a foreign one is controversial. It has been done elsewhere with the new species often closely related to the one being replaced.

For example, the North American peregrine falcon was re-established from seven subspecies from four continents, and yellow crowned night herons have been introduced to Bermuda to replace extinct herons and to control pesky land crabs. At the most extreme end of the spectrum, conservation scientist Josh Donlan has suggested that the Pleistocene ecosystems of North America be reconstituted with large African mammals — horses, camels, tortoises, lions, elephants and cheetahs — thus protecting these species from the threats they face in their natural range.

Replacing extinct giant tortoises with another giant tortoise on an uninhabited island is a much simpler prospect, for a number of reasons, according to Christine Griffiths, a research associate at the University of Bristol and the lead author of a study on the tortoise experiment, done in collaboration with the Mauritian Wildlife Foundation.

Isolated islands often lack predators, meaning a shorter food chain to consider, and the giant tortoises are easy to find and remove if they were to become a problem, Griffiths said.

Initially, researchers were concerned that the new arrivals might eat a great deal of the native plants. In 2000, the first four Aladabra tortoises arrived, and later several others followed. They were kept in pens where surveys indicated that there were no significant problem with native plants, and, in late 2005, 11 were allowed to roam free.

Now, few ripe fruits remain under the ebony trees, and dense patches of seedlings have appeared in the areas most heavily used by the tortoises. Griffiths and other researchers found that seeds that had passed through a tortoise’s gut germinated better than other seeds.  And, it turns out, the tortoises eat a lot of the non-native plants.

While the re-introduction appears successful so far, it remains to be seen if the tortoise-dispersed ebony seedlings will develop into adult trees that reproduce, write Griffiths and her colleagues in a recent issue of the journal Current Biology. A similar project is under way on Mauritius’ Round Island.

This is a case where alien species are beneficial. Other examples are where alien invasive species are controlled using other exotic predators or parasites.  However, the introduction of any alien species should only be considered after exhaustive research and trials to ensure that the alien species do no harm to their adopted ecosystems.  Humans have changed ecosystems, sometimes irreversibly, by introductions of exotic species (whether deliberate or by mistake).  Unfortunately, the little island described above (Ile aux Aigrettes) is also dealing with a rat infestation that threatens the survival of many species on the island, especially ground-nesting birds.

You may find this article interesting too: Invasive Species, Assisted by Climate Change, A Growing Problem in Antarctica.