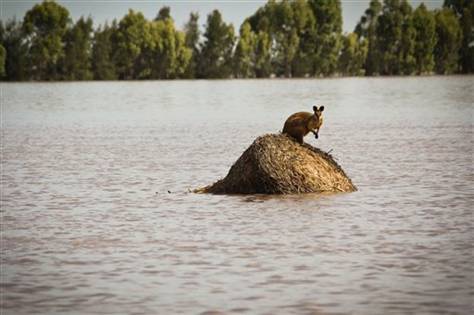 Flooding is affecting local wildlife too

Large parts of Australia’s coastal northeast disappeared under floodwaters on Sunday in a spreading disaster that has brought some of the highest floods on record and forced thousands from their homes.

Queensland State Treasurer Andrew Fraser described the floods as a “disaster of biblical proportions” and said the ultimate cost would exceed A$1 billion (1.02 billion).

As forecasters predicted months of more rain, hundreds of residents in the town of Rockhampton, 600 km (370 miles) north of the Queensland state capital Brisbane, fled homes amid rising waters which are expected to reach over 30 feet deep in coming days.

Local Mayor Brad Carter said the town was “like an island.” Across the state, the floods have affected around 200,000 people and inundated thousands of properties.

“You can look down a street for a kilometer and see nothing but water,” Carter told Reuters by telephone from Rockhampton, a town of 77,000 people. “You see people in boats moving their material in and out of houses.”

One person was confirmed dead in the floods on Sunday, while an intense search was under way for a second missing.

Floodwaters were receding in some areas, leaving a mammoth cleanup job, but other areas were still collecting runoff from the Christmas deluge brought by the La Nina weather pattern.

“It is the Fitzroy River flowing through down to Rockhampton that is still rising and expected to get quite near to record levels,” Gordon Banks, a senior forecaster in Brisbane with Australia’s Bureau of Meteorology, told Reuters.

“Those floods in the south of Queensland are hitting records. We have not seen water that high in recorded history here.”

Across the state, thousands have been forced to camp out with friends or in makeshift emergency shelters over the New Year period in a disaster which has hit coal mining and agriculture particularly hard.

Mayor Carter said Rockhampton’s airport was closed, road and rail links to the town were mostly cut off, water was lapping at the floorboards of some homes and police had sent reinforcements to prevent any looting.

Rockhampton sits near the mouth of the giant Fitzroy River system, one of Australia’s largest, carrying the water from last week’s rains down to the coast. Officials said its level had reached 8.85 meters on Sunday.

“I am at the side of the river bank at the moment. It is flowing extremely fast,” council official Tony Cullen told Reuters.

Australia’s Bureau of Meteorology said flood waters in the town could reach nine meters (30 feet) on Monday and peak at 9.4 meters on Wednesday, a level similar to floods that hit in 1991 and 1954.

Although the rain has largely eased off, flood warnings remain current for many rivers in the state, some communities are expected to be isolated for up to two weeks and eventually further rain is expected.

Police said on Sunday 22 communities were still flooded or isolated. Where floodwaters have started to recede, there are fears of disease and accidents, in what one senior emergency official said would be “a heartbreaking return to homes.”

Bureau of Meteorology hydrologist Jeff Perkins said floodwaters would also flow on down to western New South Wales. Normally the tropical wet season would only be beginning around now, meaning more headaches to come for farmers, miners and the general community.

“We have got a couple of months more and a good chance of further rainfall,” Perkins told Reuters.

“We have not seen water that high in recorded history here.”  This statement should surely convince the climate change doubters that our planet is experiencing an unprecedented change in weather patterns, at least in living memory.  Call it what you like but the extreme weather events that are occurring all over the world are real.  We can only benefit our planet by moving towards sustainable living and reducing our impact on the environment wherever possible.