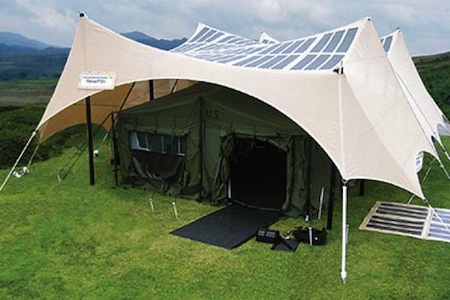 The U.S. Army is turning to renewable energy to reduce the large amounts of fuel and generators it moves to camps around the world. The Army is testing several solar powered shades and tent-like technologies that are designed to charge batteries, computers and other electric gear without the need for fossil-fuel powered generators.

The solar powered tent structures convert light energy into electricity. An Army spokesperson says the solar tents are ideal for charging batteries, night vision goggles, and computers. Advances in solar technology are now making it possible to build lightweight, portable materials that are flexible and can travel easily. The technology is being used and tested around the world including Afghanistan. Engineers say renewable energy is especially important on missions where officers don’t want to use a generator because of the noise or heat signature or where re-supplying a generator with fuel does not make sense. The technology being used is called amorphous silicon which has been around since the early 1980’s. It takes energy from the sun and converts the solar power into electrical power. The Flexible Photovoltaics (PV) products that are being tested include PowerShade, TEMPER fly and the QUADrant military shelter, all different sizes and configurations. The TEMPER fly is a 16 by 20 foot tent structure that can generate 800 watts of electricity.The QUADrant is smaller and produces about 200 watts of power.

The military have been at the forefront of many technologies that are now in everyday use (e.g. the GPS).  Military funding is often extremely generous and military institutions have the capacity  to rapidly transform new ideas into functional systems.  Now the US military is entering the realm of green technology with great benefits to the civilian world and to the environment.  Also see US Army Steps Up Requirements for Green Building, Lighting and Military Forges Ahead On [Green] Tech.