The loss of amphibian species is often the first warning sign that an ecosystem is in grave danger. 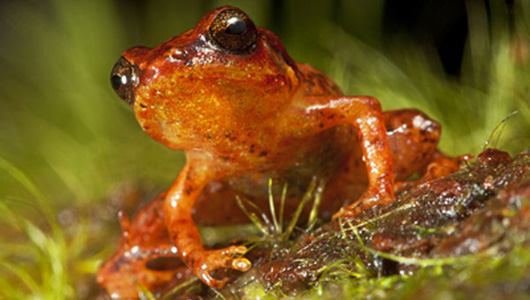 IN DANGER: Critically endangered Haitian frogs recently rescued for captive breeding and cryobanking as insurance against their extinction in the wild. (Photo: Claudio Contreras)

Haiti may be headed for a massive extinction event, one comparable to the sudden disappearance of dinosaurs, a group of biologists from Penn State warns. The group is currently taking action to prevent this loss. Blair Hedges, one of the researchers, has announced the creation of a species-rescue program for Haiti’s threatened frogs and other species.

“During the next few decades, many Haitian species of plants and animals will become extinct because the forests where they live, which originally covered the entire country, are nearly gone,” Hedges said in a statement. “The decline of frogs in particular, because they are especially vulnerable, is a biological early warning signal of a dangerously deteriorating environment. When frogs start disappearing, other species will follow and the Haitian people will suffer, as well, from this environmental catastrophe.”
Multiprong effort
The rescue mission is a multiprong effort to determine which species of amphibians and reptiles currently survive in Haiti, to pinpoint their locations, to discover any new species that previously were not documented scientifically, to relocate live populations of frogs for captive breeding, and to deep-freeze cells at Penn State.
In an attempt to save some of these reptiles, Hedges recently relocated 10 critically endangered frog species from Haiti to a captive-breeding program at the Philadelphia Zoo.
“Captive breeding and cryobanking are two efforts to preserve the species in case they become extinct in Haiti,” Hedges said.
Cryobanking involves the preservation of cells and DNA in liquid nitrogen that will permit whole-animal cloning in case any of the species becomes extinct. In addition, Hedges and the Philadelphia Zoo are working with various Haitian agencies to train Haitians in this conservation research so that they can develop the capacity to breed these species in Haiti themselves.
“A captive-breeding program is a huge responsibility. You have to feed the animals, breed them, and keep them going for years and years, possibly indefinitely,” said Carlos Martinez, amphibian conservation biologist for the Philadelphia Zoo. “But the survival of these species may depend on this work, so it is well worth the effort.”
Warning sign
The loss of amphibian species is often the first warning sign that an ecosystem is in danger. During the last 10 to 20 years, frog species have been disappearing around the world, in part due to a killer fungus that has infected and wiped out many species. Currently, one-third of the 6,000 frog species on Earth are facing extinction.
Haiti’s frogs are even worse off; 92 percent of the country’s 50 frog species are threatened, and most are identified as critically endangered. While there is some hope in the neighboring Dominican Republic, only 20 Haitian frog species can be found there.
One of the greatest threats to the frog population is the destruction of Haitian forests for the production of charcoal, the main fuel source for the country’s 10 million residents.
“We found that as many as 26 species occur together in the isolated mountain forests of southwest Haiti, greatly increasing the threat of mass extinctions when the forests there are cut down,” Hedges said.
“Less than one percent of the original forest is left in Haiti, which is a lower percentage than in any other country that I know of,” Hedges added. “There definitely is no other place in the western half of the world — and some scientists would argue in the entire world — where the extinction threat is greater than in Haiti.”
The extinction threat is a grave one.

“Unless effective help arrives soon, it is inevitable that there will be mass extinctions, and I think they are in progress,” said Philippe Bayard, president of the Audubon Society of Haiti.

Hedges is currently looking for more zoos with the capability and willingness to host captive-breeding programs for endangered Haitian species. He has set up a website, CaribNature.org, where he is posting multimedia information as well as links to conservation organizations that are working to solve the problems that are causing the species extinctions in Haiti and other areas of the Caribbean.
“Despite the massive deforestation, the fact that the frogs are still hanging on, though barely, means that it is not too late to protect their habitat,” said Robin Moore, amphibian conservation officer for Conservation International.
Source: Mother Nature Network