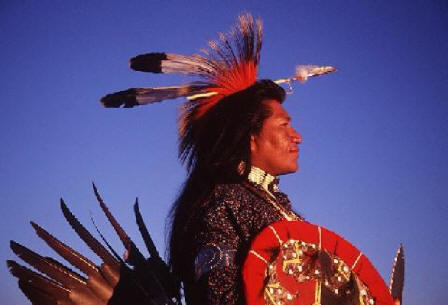 BLUE GAP, Ariz. — For decades, coal has been an economic lifeline for the Navajos, even as mining and power plant emissions dulled the blue skies and sullied the waters of their sprawling reservation.

But today there are stirrings of rebellion. Seeking to reverse years of environmental degradation and return to their traditional values, many Navajos are calling for a future built instead on solar farms, ecotourism and microbusinesses.

“At some point we have to wean ourselves,” Earl Tulley, a Navajo housing official, said of coal as he sat on the dirt floor of his family’s hogan, a traditional circular dwelling.

Tulley, who is running for vice president of the Navajo Nation in the Nov. 2 election, represents a growing movement among Navajos that embraces environmental healing and greater reliance on the sun and wind, abundant resources on a 17-million-acre reservation spanning Arizona, New Mexico and Utah.

At the grass-roots level, the internal movement advocating a retreat from coal is both a reaction to the environmental damage and the health consequences of mining — water loss and contamination, smog and soot pollution — and a reconsideration of centuries-old tenets.

But the shift is also prompted by economic realities. Tribal leaders say the Navajo Nation’s income from coal has dwindled 15 percent to 20 percent in recent years as federal and state pollution regulations have imposed costly restrictions and lessened the demand for mining.

Fossil fuels will be around for a long time still but it is imperative that renewable energy sources such as solar energy eventually replace them.  Green technology is developing at a rapid pace; solar technology, arguably, leading the race as a clean, ‘free’ energy source (no government can tax the sun’s energy…or can they?).  Solar power for homes is becoming more accessible in South Africa, especially with the current Eskom renewable energy rebates for solar geysers.

Water Rhapsody and Yes Solar Mpumalanga have combined to offer high quality water and solar energy systems to the South African public.  Water Rhapsody’s World Wildlife Award-winning water conservation systems are backed by 17 years of experience with branches through the country.  Yes Solar is an official distributor and supplier of Solsquare solar energy products.  We offer a full range of solar water heating solutions that are Eskom-approved and fitted by accredited solar installers.

Contact us for a free quote on a solar geyser, water system (including rainwater harvesting & grey water recycling), rainwater tank or water tank (we are authorized Jojo Tanks dealers in the Mpumalanga and Limpopo provinces and offer their full range of JoJo water tanks and water tank stands at very competitive prices).  We are also suppliers of high quality Atlas Plastics products and water tanks.