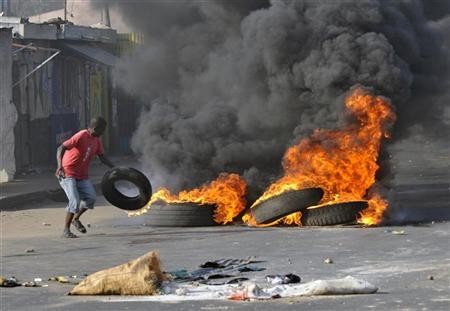 Maputo – Mozambique’s capital Maputo was gripped by violent demonstrations Wednesday as residents of poor neighbourhoods took to the streets to protest sharp increases in the cost of electricity, water and food.

Residents in at least three neighbourhoods in the north and east of the city barricaded roads with burning tyres and shouted anti-government slogans on the day electricity was scheduled to go up 30 per cent.

The cost of water has also increased by 20 per cent recently, while the cost of fuel price has also risen, squeezing the population of one of the world’s poorest countries, where over half live on less than one dollar a day.

The demonstration was organized through a mobile phone SMS campaign last week.  It was not clear who started the campaign as no name was attached to the text messages.  Witnesses said riot police had fired rubber bullets to break up the demonstrations in some areas.   It was not yet known if there were injuries.  One of the flashpoints was the main road leading from the city centre to Maputo International Airport, which is bordered by slums.  The areas around the city’s new football stadium and a major bus station in the east were also affected.  Minibus taxis – the main form of transport- had been grounded in these areas.

Since the above report was published, there have been confirmed deaths.  Is this a microcosm of what will happen worldwide when the cost of energy and water is too much to bear?  Maputo society reflects a stark dichotomy of very wealthy people and very poor people (the majority).  The energy crisis and the water crisis have forced governments to charge more for electricity and water.  Unfortunately, it is always the poor that suffer most.  While violent protests cannot be condoned, the riots in Maputo have certainly got the global community’s attention.   Mozambique has vast water resources but is lacking in infrastructure.  This country also has hydro-electric power stations at many of its larger dams. Whether the incumbent government is willing and able to share these resources with it’s people, is open to debate.  Private ownership of a resource tends to encourage good management.  In South Africa, many rural communities have been assisted with rainwater tanks that harvest rainwater from each person’s roof.  This does give individuals some independence from state water supply and protects against high tariffs.  Similarly, solar energy can provide electricity to households (photovoltaic solar panels for electricity generation and solar geysers for heating water).  Perhaps aid agencies and benevolent, wealthy nations should stop sending financial and other aid to corrupt government officials and instead should supply aid directly to the people who need it most.  Water Rhapsody and Yes Solar supply and install water conservation systems and solar water heating systems.  Be prepared for water supply cuts and electricity tariff hikes; contact us for a free quote.