Could Generating Energy from Waste Be the Answer?

Scientists at Teesside University are helping to find answers to one of the most difficult problems facing the world today — generating energy without accelerating climate change or harming food production. 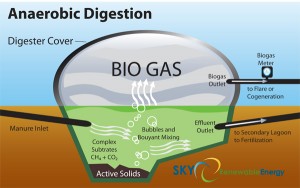 The researchers are investigating biofuels generated from wastes. This is seen by many as the ‘green alternative’ to using fossil fuels.  Biofuels may appear to be the perfect solution because they are not net producers of harmful environmental by-products, but they create another problem as they can encourage farmers to grow energy crops at the expense of badly-needed food, particularly in poorer countries in the world.  Looking for an answer to the ‘food-fuel conflict’ is at the heart of research led by Dr Komang Ralebitso-Senior, Senior Lecturer in Molecular Biology at Teesside University.

Her team of six researchers based within the University’s Technology Futures Institute is looking at whether biofuel production could use waste materials, such as domestic refuse and sewage sludge, instead of energy crops to generate biogas. The biogas could then be used directly or to produce alternative energy sources such as electricity.

“We’re carrying out laboratory investigations to optimise the production of biogas through a process known as anaerobic digestion. This uses naturally- occurring micro-organisms to break down waste in closed vessels,” she says.

Dr Ralebitso-Senior believes that, although anaerobic digestion is an established process already being used by some waste-to-energy companies, its full potential has not yet been realised in solving many of the problems associated with growing biofuel crops.

“We can produce most biofuels using crops — but the big issue is whether the land could be used for food instead. The loss of agricultural crops is a major concern.

“We call this the food-fuel conflict as the economic returns of growing crops for fuel are often higher and with more farmers choosing this option, foodstuffs inevitably become more expensive.”

She says, “Using anaerobic digestion is an alternative method which has considerable potential, but we still do not understand a lot about how it works. That is what we are investigating in the laboratory, seeking ways in which we can optimise and, therefore, exploit the process effectively.

“This work has significant potential because it can produce a biofuel which is truly sustainable. The refuse from which the biogas is produced would have ended up in landfill, with possible damage to the environment, and also there will not be the need to grow crops which take food away from people.

“The value of biofuels is their potential to be sustainable, providing a good balance between the environment, the economy and society. This is very exciting work,” she says.

The potential of this research has attracted interest from Teesside’s Centre for Process Innovation (CPI) based at Wilton, which is supporting the PhD programme associated with this work.

For Dr Ralebitso-Senior, the external support is crucial. “The next stage after the PhD is developing a new bioreactor type at pilot-scale, but for the system to be viable we need an even larger capacity. We’re looking at it taking a number of years to go from laboratory to pilot to actual scale, with modifications and additional research along the way. The only way the project may be realised sooner is if we can integrate findings from other research teams in the region, then nationally and internationally.”

The work is the latest phase in a career which has seen Dr Komang Ralebitso-Senior, an applied environmental molecular microbiologist, work all over the world, including Lesotho, South Africa, the Netherlands and Singapore.

Fuel from crops is controversial but has its place.  For example, where food crops fail to grow on marginal land,  other energy-rich plants may do well.  Mozambique has begun planting large areas to Jatropha where there was once tobacco- it is not replacing edible crops.  Obtaining energy from waste is one of many ways of helping to make our existence more sustainable.  With the world’s population increasing by the second, waste in landfills is becoming more and more of an issue.  Landfills and waste management in general seem to have been left behind technologically.  We may see old landfills becoming a valuable energy resource in the future; as soon as something has value, humans tend to pay more attention to it.  Unfortunately, even essential resources such as water are often taken for granted (especially when it’s cheap and seemingly plentiful).  However, this situation is changing; good quality potable water is becoming a scarce and valuable commodity.  We all need to become more ‘water wise’ in our everyday lives.  Water Rhapsody conservation systems comprise of water saving devices including rainwater harvesting systems, grey water systems and other innovative, environmentally friendly products (see our product demo).

Harvest Energy and Drinking Water from Your Toilet?