Are desalination plants the answer to water shortages?

By admin on March 21, 2010 in desalination, water pollution, water shortages 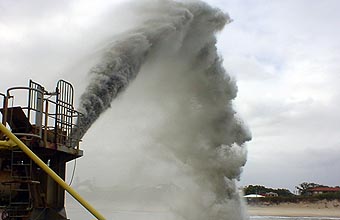 The common misconception that the brine stream byproduct of desalination is ‘just salt’ has been challenged by warnings of heavy metals and industrial chemicals in the discharge. Comprehensive Environmental Effects Statements must completed before any desalination plant can be constructed anywhere on Australia’s coastline & the more environmentally friendly alternative of water recycling must first be considered.

Leading desalination expert Sabine Lattemann, of the Institute for Chemistry and Biology of the Marine Environment at the University of Oldenburg Germany, has chaired a World Health Organisation committee charged with creating guidelines for the environmental impact assessment studies of desalination plants. Miss Lattemann has published details regarding the content of the brine stream and allowed the Clean Ocean Foundation to release this information to the Australian public:

Chlorine – Added to the desalination plant feedwater to prevent biofouling on heat exchanger surfaces.
Heavy metals – Heavy metals pass into the solution when the plant’s interior surfaces corrode.
Antiscalants – On heat exchanger surfaces, inside tubes, or on membranes to increase plant performance.
Coagulants – Coagulants such as ferric or aluminum chloride are used to improve filtration.
Oxygen scavengers – Sodium bisulfite is commonly used as a neutralizing agent for chlorine.
Cleaning chemicals – such as alkaline cleaning solutions (pH 11-12) are used for removal of silt
deposits and biofilms, whereas acidified solutions (pH 2-3) remove metal oxides and scales.
Other – Further chemicals are often added to improve the cleaning process of membranes, such as detergents, oxidants, complexing agents or biocides for membrane disinfection.

ʻChlorine is a strong oxidant and highly effective biocide. Residual levels in the discharge may therefore be toxic to
marine life in the discharge site. The use of chlorine also leads to the formation of oxidation by-products such as
halogenated organics. These compounds are usually rather persistent in the marine environment and sufficient evidence exists that some of them are carcinogenic to animals.ʼ said Miss Lattemann.
ʻHeavy metals tend to enrich in suspended material and finally in sediments, so that areas of restricted water exchange
and soft bottom habitats could be affected by heavy metal accumulation. Many benthic invertebrates feed on this
suspended or deposited material, with the risk that metals are enriched in their bodies and passed on to higher trophic levels.
Most of the named cleaning and disinfection chemicals may be hazardous to aquatic life, so that disposal to the ocean
should be strictly regulatedʼ.

ʻThe process of desalination is not per se environmentally friendly and seawater desalination plants also contribute to the wastewater discharges that affect coastal water quality. This is mostly due to the highly saline brine that is emitted into the sea, which may be increased in temperature, contain residual chemicals from the pretreatment process, heavy metals from corrosion or intermittently used cleaning agentsʼ.

ʻThe effluent from desalination plants is a multi-component waste, with multiple effects on water, sediment and marine
organisms. It therefore affects the quality of the resource it depends on.’ concluded Miss Lattemann.
The effects of brine stream pollution can be avoided by using recycled water, which is cheaper and twice as energy-efficient as desalination. This would also end the single greatest source of marine pollution in Australia: the 144 wastewater outfalls around the country that discharge a huge volume of partially treated effluent into our oceans and waterways.

The proposed Wonthaggi desalination plant in Victoria would be the largest in the Southern Hemisphere generating at least 924,990 tonnes of CO2 equivalent gas per year*. This is equivalent to having 205,553 more cars on the road.

Desalination projects require proper Environmental Impact Assessments (EIA’s) in South Africa before they are constructed.  I have personally witnessed the negative environmental impacts of seawater desalination plants in Abu Dhabi and Dubai in the United Arab Emirates.  There are some situations where these plants are the only option but there are others where water recycling measures (as well as rainwater harvesting and grey water re-use) would be far better for the environment and humans.  Desalination is achieved by a process of Reverse Osmosis (RO) whereby the salt and other minerals are removed.  Sometimes minerals are returned to the water by man but there are some controversial health risks associated with drinking RO water. Water scarcity and water shortages are a reality in South Africa; we provide sustainable solutions.  All Water Rhapsody Conservation Systems are environmentally friendly and have won WWF Awards.  Water and energy are linked so Water Rhapsody has incorporated Yes Solar Mpumalanga (solar energy); Yes Solar supplies Solsquare (Germany) solar water heaters that are installed by qualified solar installers.  Solsquare solar geysers are SABS-approved and are eligible for solar water heating Eskom rebates.

Contact us for a free quote on a solar geyser, rainwater harvesting system, greywater recycling system or JoJo water tank (we are authorized JoJo Tank dealers and can supply and install the full range of JoJo water tanks and JoJo tank stands).