FLOODING has inundated 7,320 properties around the country this year, including nearly 1,900 in recent weeks. Models predict that the climate will get wetter, with more intense downpours in winter, putting more houses and businesses at risk. The damage is estimated at some £1.1 billion ($1.8 billion) a year. 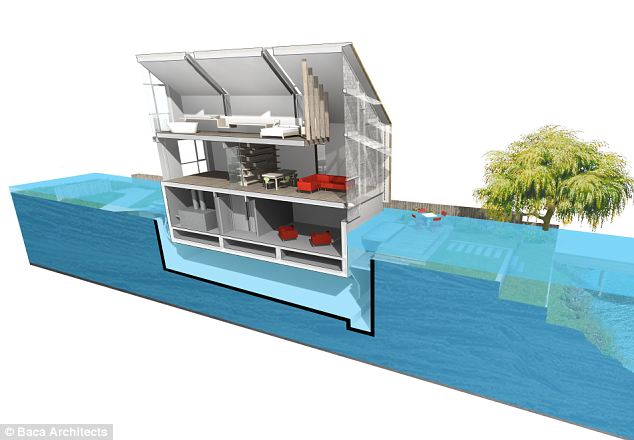 As floods grow more frequent, and as Britons hunker down for another spell of daunting weather—with reports now forecasting snow—it has become fashionable to consider ways of living with the water instead of fighting against it.

Traditional defences of bigger barriers and drains remain necessary but are often expensive, unattractive and ineffective, says David Balmforth, a flooding expert at the Institution of Civil Engineers. When a wall is overtopped or a levee collapses, exposed homes may be ruined.

But architects are now designing amphibious homes capable of handling even the most merciless of storms.

A holiday park in Evesham recently survived a bursting River Avon thanks to flotation devices strapped to the caravans. Britain’s first fully buoyant home, tethered to a fixed foundation but able to float on flood water, will soon be built near the Thames. Designed by Baca Architects, the house is inspired by similar efforts in the Netherlands.

Residents who prefer more terrestrial abodes still have plenty of prosaic ways to weather storms. In “Your Home in a Changing Climate”, a report from the Greater London Authority, homeowners are advised simply to reposition important things such as meters, boilers, electrical points and paperwork above flood level. Carpets and timber floors can be replaced with ceramic tiles or concrete.

Yet the best trick is to make the landscape more absorbent. Britain’s catastrophic floods of 2007 were largely the result of overloaded drainage.

Storing water where it lands, rather than sweeping it into drains, relieves sewers and often makes for a more pleasant environment. Contours in the landscape can also direct the flow away from homes and towards more absorbent greenery.

American cities including Portland and Philadelphia have introduced such measures, calling them cost-effective and aesthetic ways to manage flood risk and water supplies. Storing rainwater in rainwater tanks can also offset the effects of drought. But in Britain no single authority is responsible for managing water. Local councils handle anything above ground, water companies are responsible for the pipes beneath, and flooding from rivers and the coast is the domain of the national government. Financing for water companies also tends to favour big capital investments rather than mitigation schemes. The incentives are not aligned for grand projects, says Elliot Gill, a water-policy expert at CH2M HILL, a consultancy.

Some Welsh plans may point the way forward. To keep properties in Gowerton and Llanelli from being flooded with sewage, Welsh Water, a non-profit water company, is working with local authorities to invest some £150m up to 2025 in new parks and planters to manage rainwater flow. Otherwise the company would need to spend around £600m on underground storage tanks. “It makes huge economic sense for us to do this,” says Fergus O’Brien of Welsh Water. His tone is gushing.

Rainwater harvesting not only reduces water bills and ensures that rainwater tanks can be utilized during the dry season but also helps the environment by reducing stormwater runoff, as the above article mentions.  Urban areas with their impervious surfaces create a massive amount of stormwater runoff which ultimately ends up in streams and wetlands that are not able to cope with the unnatural quantities of water.  This causes stream bank erosion and destruction of aquatic ecosystems and flooding.  Rooftop rainwater harvesting need not be complicated nor expensive.  Rainwater systems range from simple downspouts leading to a rain barrel or small water tank to more sophisticated systems that integrate with the existing water supply and have far more rainwater storage capability (a series of large water tanks or even underground water tanks where space is limited).  Click on the links below to view the wide range of JoJo Tanks water tanks, rainwater tanks, steel tank stands and other jojo tanks products.