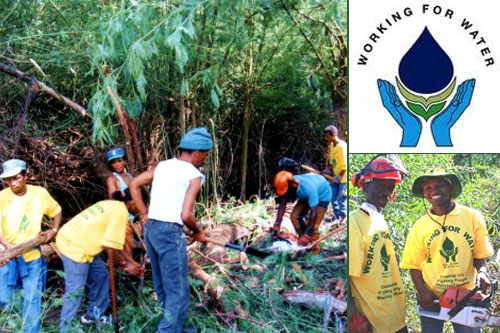 After a period of ten years, the Working for Water programme, which is the brainchild of the former minister of education as well as forestry and environmental affairs, Prof Kader Asmal, has taken a giant leap after the injection of R18.3m to the Northern Cape department of environmental affairs by the national government.

Water and Environmental Affairs Deputy Minister Rejoice Mabudafhasi announced the investment on Friday during the Weed-Buster Month celebrations at Onseepkans in the Namakwa region.

Onseepkans, a rural settlement situated at the border with Namibia, is a semi desert area which experiences invasive alien plants, which cause land and environmental degradation. “The money is put aside to make more public awareness and increase understanding about the problem of alien plants and to make the public make the connection between gardening and agricultural practices,” said Mabudafhasi.

She said the campaign is linked to the invasive plant control initiatives by countries such as Australia and New Zealand, as well as to the broader Global Invasive Species Programme. The deputy minister said the Working for Water programme has created 36000 jobs nationally during the 2011-12 financial year through clearing of invasive alien plants. Of those jobs, 18000 were women, 22000 were youth, and 500 disabled.

“The programme is the largest public funded initiative aimed at managing invasive alien plants in the world, and an excellent example of integrating environmental conservation and poverty eradication objectives,” she said.

This year’s programme is themed: goggas nip weeds in the bud. “As much as they play an important role in our lives and appear beautiful, they consume much water which we don’t have. We must therefore be able to control these invasions.” Mabudafhasi said.

“A number of people, especially women, have been trained in this regard to out these alien plants to good use but that doesn’t mean we need to relax as we still need substantial control over invading plants,” she said.

To control certain invasive plant species, biological has been introduced; it reduces the need for using herbicide, a chemical substance used to destroy or inhibit the growth of plants, especially weeds.

Agricultural Research Council scientist, Allen Wood, said the biological control of weeds is the most suitable option because it is relatively cheap and very safe compared with the costs and risks associated with using herbicide. “It can be successfully integrated with other management practices and it is self-sustaining as well.”

The department has invested over R20m in research and implementation of biological control, and a further R4m contributed from partnerships with the Agricultural Research Council and academic institutions.

Many people do not realise the damage that alien plant species do to our ecosystems.  A big problem is where alien species consume water – a precious resource in South Africa.  The Working for Water Programme has been successful in some areas but many areas need better follow-up to ensure poisoned plants do not recover.  Eucalyptus trees (planted as a commercial tree in South Africa) are particularly high water users and should be removed wherever they are encountered along streams and other water courses.

South Africa: Some Durban Residents Object to Water Recycling Proposal
VIDEO: How To Save Water in 6 Easy Ways