How to make a solar water heater from plastic bottles 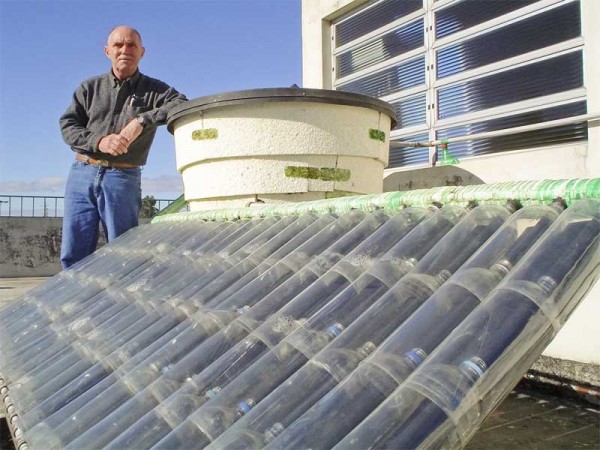 José Alano is a model of creativity in tackling environmental problems in Brazil. In 2002, the retired mechanic transformed a pile of plastic bottles and cartons into a solar water heater. Since then, thousands of people in southern Brazil have benefited from Alano’s invention, saving money while reducing waste.

The idea came from the lack of recycling collection services in his small home town of Tubarão. Refusing to throw plastic bottle, carton and other recyclable waste into the landfill, José Alano soon realised he had a problem: a room full of rubbish.

‘Being 59 years old, I have had the opportunity to witness the technological advances of science, which improved food storage. But nowadays, some packaging weighs almost the same than the food itself! Years ago, my wife and I realised that we were not prepared for this new form of consumption.’ 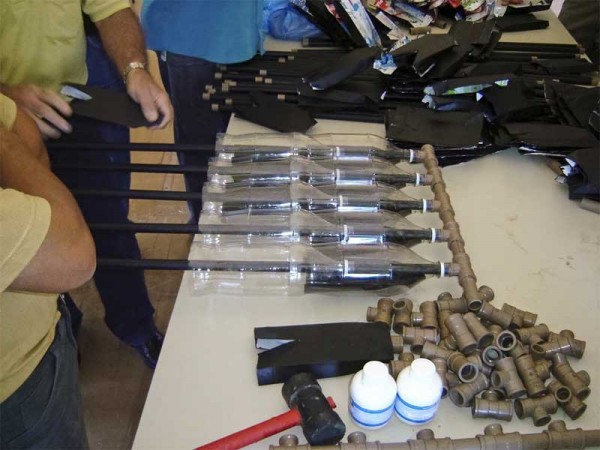 Using his basic knowledge on solar water heating systems, he and his wife built an alternative version using 100 plastic bottles and 100 milk cartons. ‘It worked perfectly well, and we got rid of our waste in a responsible way,’ he says.

Alano’s initiative became widely known in Brazil after winning the Superecologia prize, offered by the Superinteressante magazine for renewable projects in the not-for-profit sector. Since then, the retired mechanic has been busy with workshops and lectures in community centres and schools, particularly in the Brazilian southern state of Santa Catarina, where he lives.

Yet, Alano never wanted to profit from it, and explains why: ‘I am a simple person, but I am very aware of my own responsibilities as a consumer. The recycled solar water heater was just my small contribution to the environment, and to improve the lives of people who need to save money. I registered the invention, so nobody else could copy and profit from it. Although the information on how to build it is in the public domain and anybody can access it, there are two restrictions: to its industrial production and to its use by politicians during electoral campaigns.’

The information on how to build the recycled solar heater has reached communities through the support of local governments, media, state-owned and private electricity companies, which also donated pipes and other materials.

Alano says that now it is difficult to keep track of all the projects being developed across Brazil, but he mentions some figures from the southern states: ‘More than 7,000 people are already benefitting from the solar heaters in Santa Catarina state alone. There are two cooperatives, one in Tubarão and other in Florianópolis, the last producing 437 solar heaters to be installed in council houses. In Paraná state, the number of solar heaters had reached 6,000 in 2008, thanks to the DIY leaflets and workshops that the governmental body SEMA organised there.’

The alternative water heater can provide power savings of up to 30 per cent, but apart from that, Alano notes that every recycled solar water heater built also means less plastic bottles and cartons finding their way to landfill. Since Alano’s invention, Tubarão has been benefiting from regular collection of recyclable waste, something that unfortunately still doesn’t happen in many Brazilian towns.

Alano has lost count of the number of times he has lectured or been visited by groups of students, eager to learn about the invention. However, this is not his only one. Alano designed a low cost multifunctional bed for disabled people, but he is struggling to find a business partnership. Although there has been much interest to put it into production, Alano says that the problem is always to keep profits lower in order to benefit the consumers.

Eight years after its creation, the solar heater still takes a lot of his time, but he believes that now he will finally be able to focus on the multifunctional bed and other projects: ‘The recycled solar water heater is only the result of persistence over frustration’, he explains. ‘I don’t consider myself an inventor. I am just a citizen trying to find solutions to problems.’

Despite latitude and climate differences between southern Brazil and Britain, the solar water heater designed by Alano is based on the principle of thermosyphon, used in many commercial heaters sold in the UK for as much as £6,000. In this system, neither pumps nor electricity are used to induce circulation. The different water densities are enough to cause a cyclic movement from the collector panel to the tank: less dense hot water upwards, more dense cold water downwards.

The assembly is straightforward, and can be better understood through the illustrations contained in the DIY leaflet (text only in Portuguese). Obviously, size does mater. Alano reckons that to heat water for a shower of one person, a 1m² panel would be enough.

With the diagrams in the DIY leaflet as a guide, use the 100mm PVC pipe as a mould and cut off the bottom of the bottles. Cut the 20mm PVC pipes into 10 x 1m and 20 x 8.5 cm pieces, and assemble with the T-connectors. Cut and paint the cartons (pag.10-12), as well as the one-meter long pipes. Assemble according to figure B.

The panels must be placed at least 30 cm below the tank and be sited on a south facing wall or roof. To optimise heat absorption, the panels must be mounted at the angle of your latitude, plus 10°. In London, for instance, the panel’s inclination should be 61°. Alano recommends that the plastic bottles in the panels should be swapped for new ones every 5 years: ‘Over time, the plastic becomes opaque, which reduces the heat caption, while the black cartons can be repainted.’

Source: The Ecologist (By Giovana Zilli)

This simple and effective diy solar water heater would be ideal for South Africa and it’s neighbouring countries – landfills are being overwhelmed by plastic water bottles and the majority of people in the region do not have access to hot water.