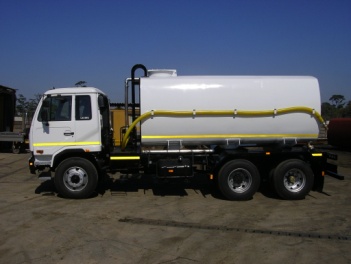 Dams, reservoirs and desalination plants are expensive things to build on the off-chance that there is a drought. Gordon Cope explores a low, fixed-cost alternative to infrastructure investment.

There is a mismatch between water scarcity and water infrastructure. For most countries (except permanently arid regions such as Saudi Arabia) water scarcity is a seasonal, unpredictable and annually variable issue.

For the most part, water infrastructure is permanent and needs to be planned years in advance. It creates a major challenge for municipalities and water supply agencies. It is very difficult to convince the public to pay for an asset such as a desalination plant, dam or reservoir on the off-chance that it might be used for a few weeks in several years’ time, but leave the investment too late and voters are unforgiving.

Even then building assets just in case they are needed is fraught with risks, as the City of Santa Barbara in California discovered when it built a $34 million desalination plant in response to a drought in the late 1980s which it has never used since.

In an ideal world, there would be an interim solution to water scarcity which might have high variable costs, but would not involve any major commitment of capital until it was entirely clear that it was necessary. A number of entrepreneurs have suggested building floating desalination plants which sail around the world to deliver water to port as are required. So far none have been able to raise the money to complete such a project.

There is of course a lower tech solution. Taking water by ship to where it is required. It has been happening for years.

John Anderson is a senior partner with CWE, a New Jersey-based company that transports water. “Bulk water transport will never be commonplace because you have to have the right confluence of political will and limited distance and acceptance within the community to receive water,” he says. Still, that doesn’t mean that deals aren’t being worked out.

“We’re involved in a project that’s been four years work. We have all partners involved, from the seaport to offloading.”

The business of moving water in bulk can be roughly divided into three major components: source, transportation and destination. “Potential sources of bulk water are located in countries where water is excess to local needs and where it is completely renewable on an annual basis,” says Fred Paley, a principal at Global H2O Resources, based in Vancouver.

“The state of Alaska, Canada, Norway and Iceland have excess water.” Although sources are numerous, the general lack of loading facilities limits options. “There are 12-13 different water depots in the world,” says Anderson.

“The Delaware River Basin Commission (New Jersey, Pennsylvania, and New York) has a port. South Carolina has a depot, and there are depots in Indonesia.”

At one time, the most efficient method of transporting water was by tanker. In the 1980s, the port of Marseille moved 45,000m3 of water via converted vegetable oil tankers (which are easier to clean than oil tankers) to drought stricken areas in Spain and Italy. That trade no longer occurs, however.

“Regarding water in bulk, we did some traffic with Spain indeed in the past but this traffic does not exist anymore,” says Gautier Hotte, spokesman for the Marseille Port Authority. “My colleague at the statistics did not find a single ton of what we call Industrial Water.”

In fact, the bulk movement of water via tanker is currently at very low levels. “I don’t believe that there are any (long-term) contracts involving tankers in North America,” says Anderson. Even the spot market (usually the delivery of bulk water to areas stricken by drought or disaster) hardly registers on the radar.

“There might be 20 (tanker loads per year) around the world.” At an average of 50,000 deadweight tons per shipment, that would imply an annual shipment of bulk water by tanker in the neighbourhood of one million m3.

Transport of bulk water has shifted to barges, which are much less expensive to operate and dock, yet can still transport large volumes; each one can carry from one to 10 million litres a trip. “There’s a busy barge business in the Caribbean and the coast of Brazil,” says Anderson.

The Bahamas Water and Sewerage Corporation is a prominent example. In 1976, problems with its desalination plant in the capital of New Providence forced the company to seek new sources of water. It purchased several barges and began shipping water from Andros Island, 60 kilometres away. Although the process was supposed to be temporary, it continues to this day, transporting 20,000m3/d.

Bladders are even more cost effective. Made of thick polyurethane material, the cigar-shaped bags can be filled at source, towed like barges to drought stricken areas, then serve as an offshore reservoir as they are slowly drained. Nordic Water Supply has devised bladders that will carry up to 35,000m3 of water to transport water from Turkey to northern Cyprus.

Aquarius Water Trading and Transportation Ltd of Greece operates a fleet consisting of eight 720m3 bags and two 2,000m3 bags. It fills the bladders at the Greek port of Piraeus then tows the devices by tugboat to nearby islands suffering summer droughts, where they are linked to the water system. “It seems to go well,” says Anderson, who has toured Aquarius’ system. “It’s a fairly robust market.”

The largest percentage of exported water, however, is prepackaged. Around a quarter of the 130 million m3 of bottled water drunk each year is consumed outside the country of origin. The majority of that, some 30 million m3 annually, would move by container ship. “In 2004, the total traffic of mineral water in bottles through the port of Marseille was 466,000 tons [466,000m3],” says Hotte.

“Exports are mainly destined for North America and the Far East [Japan, China] and then South East Asia. These exports use regular container lines from the Fos harbour.”

But even the staggering amount of bottled water pales in comparison to the movement of crude, which accounts for 130 million m3 every fortnight. Few would argue that water isn’t as important as oil; why the discrepancy?

A cork in the tap
Without a doubt, public opposition to the export of water plays an important inhibiting role. When several British Columbia companies sought permission to ship water south to parched regions of the US, the hue and cry by environmentalists and nationalists forced the provincial government to impose a ban on bulk water exports in 1993, one that still exists.

“Political will founders on adverse public reaction,” says Anderson. “People say  ‘why give water to a foreign country we don’t like? ” Opposition to the movement of water can also arise at the user’s end. “If you don’t elicit the support of the community receiving the water, you will have problems,” notes Anderson.

The lack of infrastructure is also a limiting factor. Most water utility systems are simply not set up to receive bulk shipments from ports; the vast majority is either sourced at reservoirs or wells. Also, there is a significant lack of loading facilities; the port of Sitka, which wishes to ship billions of litres of water, has no dedicated dock. “They are looking at a system for cruise ships by 2007,” says Paley.

But the single largest factor hindering the movement of water is cost. According to the United Nations International Environmental Technology Centre (IETC), the Bahamas Water and Sewerage Corporation pays about $0.60/m3 for production and receiving facility charges. It costs a further $0.89/m3 to ship the water 60 kilometres, for a total cost of $1.50/m3. This does not compare well with current desalination techniques, which have lowered the price to the $0.60/m3 range.

And when the distance from source to consumer increases, so does the price tag. Prior to Hurricane Katrina, shipping crude oil from the Middle East to North America cost approximately $7/m3. Transportation prices for large tankers have since tripled, and are expected to stay high for some time. “Distance from source to offloading is extremely important,” says Anderson. “You can’t run a tanker from Alaska to San Diego and think you’ll make money.”

For now, water transporters must work out sophisticated plans to make their projects economically feasible. The city of Sitka in Alaska advertised meltwater from its lake as a potential water resource in GWI last year. Quest Imports International, a New York-based trading firm, now has a licence to move 20,000m3 annually from the lake. The company is exploring a value-added approach called harvesting. “With harvesting, not only do you use the water for bottling but you harvest minerals out of the water using distillation,” says Abe Shah, a senior partner at Quest. “You can use the minerals for health and other purposes, and you can use the distilled water for hospitals and cleaning computer motherboards.” The company is also working to reduce transportation costs. “Quest is creating its own dedicated fleet from retrofitted tankers.”

In spite of public opposition and high transportation costs, the inexorable rise in demand and depletion of resources will eventually create a need for transported water. “We are at the cusp where the public is looking at it and it is becoming acceptable,” says Anderson. Potential clients may be in areas where indigenous supplies have been polluted, such as Bangladesh, or where there is no access to the energy needed for desalination, such as Gaza.

After that, markets that contain the right geographical confluence of source and consumer will emerge. “Areas where you have rivers exiting onto the ocean in relatively unpopulated regions, and arid regions within 1,000 miles,” says Anderson. “Central American rivers, for instance, and coastal Peru. There are similar areas in Asia and Africa.

“Twenty years from now, there will be a small but lucrative trade in shipped water,” Anderson continues. “It won’t ever be commonplace, but there will always be a market segment there. A small group of individuals in the world will be doing it.”