Dumping all our household waste on landfill is bad for the environment. A Spanish company teamed up with European Scientists and engineers to find the best way to ensure more of our organic rubbish is turned into biogas and compost.

Hundreds of years ago, humans discovered flammable gas could be produced 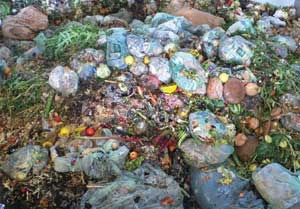 from rotting organic matter like food — a process called anaerobic digestion. Today, EU laws are pushing governments to use that ancient knowledge to turn household organic waste into compost to enrich soil or biogas for energy. Our environment would be the winner since less waste would end up being dumped in diminishing landfill sites.

However, while the scientific theory is simple, treating the flow of thousands of tonnes of rubbish in ways that are commercially feasible for businesses can be a headache, as the participants in EUREKA project BIO-EXPERTISE knew from their experience in the industry. “On paper, the theory works well, but the practice on an industrial scale is different,” explains Catherine Milhau, project co-ordinator, who heads scientific development at the environmental services division of Spain’s FCC Medioambiente.

With more and more Spanish local authorities offering contracts to companies able to treat waste, FCC increased its efforts to make the process of making biogas, also known as biomethanisation, more effective. The firm realised industrial plants had previously imported processes from northern Europe, failing to take account of the specific circumstances of Spain where recycling organic waste was relatively new and where the percentage of fresh food in waste was relatively high due to Spanish culinary tradition.

“Rubbish is very diverse and varies from region to region and from country to country,” says Milhau. Even an economic crisis can change the composition of our rubbish. “Now you see less organic matter because often ready meals like pizzas work out cheaper than fresh ingredients,” says Milhau.

Waste treatment equipment manuals did not make much allowance for changes in the composition of rubbish or cultural factors. The bacteria that break down urban waste are also sensitive to a whole range of factors like temperature. “You’re not dealing with a mechanical process like a clock,” she says. “Small changes in the parameters of the process can stop it, and in the plant we haven’t got time to experiment: rubbish doesn’t stop; it arrives every day.”

After winning EUREKA backing and securing funding totalling €3.41 million, the firm got engineers and researchers on board from Spain and France to evaluate the methodology used in treating solid waste in anaerobic digestion plants in order to improve it. The team chose an FCC treatment plant in Valladolid, in the north of Spain, which handles 200,000 tonnes of rubbish a year, as its industrial pilot plant.

The scientists and engineers compiled endless databases on factors affecting the biological processes of composting and biomethanisation, and began feeding their conclusions back to the Valladolid plant supervisors to enable them to improve daily operations there.

Through five years of meticulous research and testing, the EUREKA project developed a methodological guide to biomethanisation. At Valladolid, the biogas produced is converted to electricity. Part of it is used to run the installations and the rest of it is sold to the Spanish grid system.

Also see Biogas project launched to assist with power supply in rural South Africa and Could generating energy from waste be the answer?