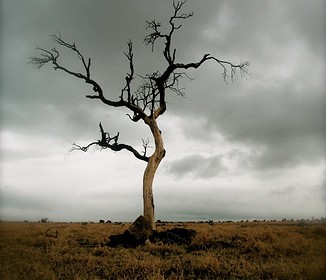 The affected area, which is south of the city of Canutama and near the Mapinguari Jacareúba / Katawixi indigenous reservation in Rondônia, was first detected by Brazil’s deforestation monitoring system. A subsequent helicopter overflight last month by IBAMA revealed thousands of trees largely stripped of their vegetation. Authorities later found nearly four tons of chemicals — 2,4 – D AMINE 72, U46BR, Garlon 480, and mineral oil — along trans-Amazon highway 174. The herbicides would have been enough to defoliate roughly 3,000 ha (7,500 acres) of forest, which would then be cleared for cattle ranching or agriculture.

IBAMA says use of chemical defoliants is a relatively new phenomenon in the region, but represents a troubling development, according to Cicero Furtado, coordinator of the investigation.

If used improperly, [the chemicals] can cause serious damage to the environment such as pollution of groundwater, loss of biological diversity in soil, killing animals and insects, among others,” added a statement from IBAMA.

The news comes as the Brazilian government announced a sharp increase in deforestation over this time last year. Analysts say speculation that Brazil’s environmental laws will be weakened under a Forest Code reform bill making its way through Congress, coupled with rising commodity prices, is contributing to the increase in forest clearing.

The United States famously used Agent Orange — a 50-50 mixture of 2,4-D and 2,4,5-T — during the Vietnam War to defoliate vast areas of forest in Vietnam, Laos, and Cambodia. The herbicide has been blamed for hundreds of thousands of deaths and deformities.

Fracking: A Clear and Present Danger
How Will Cities Supply Enough Water in the Future?