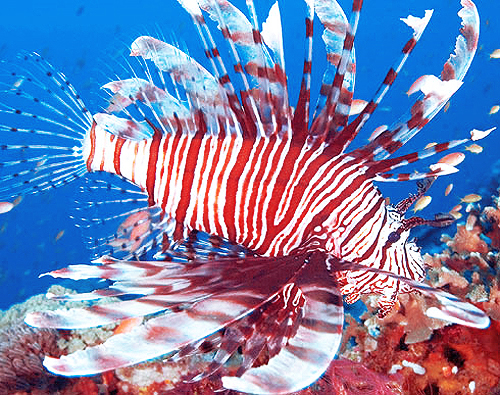 Although the invasive lionfish appears off-putting, some see a growing place for it on American plates.

With its dark red and black stripes, spotted fins and long venomous black spikes, the lionfish seems better suited for horror films than consumption. But lionfish fritters and filets may be on American tables soon.

An invasive species, the lionfish is devastating reef fish populations along the Florida coast and into the Caribbean. Now, an increasing number of environmentalists, consumer groups and scientists are seriously testing a novel solution to control it and other aquatic invasive species — one that would also takes pressure off depleted ocean fish stocks: they want Americans to step up to their plates and start eating invasive critters in large numbers.

“Humans are the most ubiquitous predators on earth,” said Philip Kramer, director of the Caribbean program for the Nature Conservancy. “Instead of eating something like shark fin soup, why not eat a species that is causing harm, and with your meal make a positive contribution?”

Invasive species have become a vexing problem in the United States, with population explosions of Asian carp clogging the Mississippi River and European green crabs mobbing the coasts. With few natural predators in North America, such fast-breeding species have thrived in American waters, eating native creatures and out-competing them for food and habitats.

While most invasive species are not commonly regarded as edible food, that is mostly a matter of marketing, experts say. Imagine menus where Asian carp substitutes for the threatened Chilean sea bass, or lionfish replaces grouper, which is overfished.

“We think there could be a real market,” said Wenonah Hauter, the executive director of Food and Water Watch, whose 2011 Smart Seafood Guide recommends for the first time that diners seek out invasive species as a “safer, more sustainable” alternative to their more dwindling relatives, to encourage fisherman and markets to provide them.

“What these species need now is a better — sexier — profile, and more cooks who know how to use them,” she said. She has enlisted celebrity chefs to promote eating the creatures.

Scientists emphasize that human consumption is only part of what is needed to control invasive species and restore native fish populations, and that a comprehensive plan must include restoring fish predators to depleted habitats and erecting physical barriers to prevent further dissemination of the invaders.

“We are not going to be able to just eat our way out of the invasive species problem,” Dr. Kramer said. “On the other hand, there are places where this can be a very useful part of the strategy.”

The United States Fish and Wildlife Service is now exploring where it might be helpful. Models suggest that commercial harvest of Asian carp in the Mississippi would most likely help control populations there, “as part of an integrated pest management program,” said Valerie Fellows, a spokeswoman.

In practice, it is still unclear whether commercial fishing pressure could be high enough to have a significant impact, she said. The Army Corps of Engineers has spent millions of dollars to erect electronic barriers to keep Asian carp from moving from the Illinois River into the Great Lakes.

There are risks to whetting America’s appetite. Marketing an invasive species could make it so popular that “individuals would raise or release the fish” where they did not already exist, Ms. Fellows said, potentially exacerbating the problem; tilapia were originally imported into Latin America for weed and bug control, but commercialization helped the species spread far more widely than intended.

Dr. Kramer is concerned that the marketing of lionfish might increase the number of traps on reefs, which could trap other fish as well. He said spearfishing was the sustainable way to catch lionfish, which are reef dwellers.

Cookbooks do not say much about how to filet an Asian carp, which has an unusual bony structure. And even if one developed a taste for, say, European green crab soup, there is nowhere to buy the main ingredient, though it is plentiful in the sea.

To increase culinary demand, Food and Water Watch has teamed up with the James Beard Foundation and Kerry Heffernan, the chef at the South Gate restaurant in New York City, to devise recipes using the creatures. At a recent tasting, there was Asian carp ceviche and braised lionfish filet in brown butter sauce.

Lionfish, it turns out, looks hideous but tastes great. The group had to hire fishermen to catch animals commonly regarded as pests. Mr. Heffernan said he would consider putting them on his menu and was looking forward to getting some molting European green crabs to try in soft-shell crab recipes.

Last summer, the Nature Conservancy sponsored a lionfish food fair in the Bahamas, featuring lionfish fritters and more. They offered fishermen $11 a pound — about the price of grouper — and got an abundant supply. Lionfish, native to the Indian Ocean and South Pacific, arrived in the Caribbean in the early 1990s and are spreading rapidly; voracious eaters, they even eat juveniles of native fish.

Lionfish, like grouper, can carry ciguatoxin, which causes vomiting and neurological symptoms, so they cannot be taken from water where the microbe that produces the toxin is found. The fish’s venomous spines must be removed before sale, although that is not a serious marketing obstacle.

America now also has a problem with Tilapia (many species of which are indigenous to South Africa) where it seems that although they are a delicacy, Americans can’t eat enough of them!  The Mediterranean Sea has also been invaded by hundreds of alien species and Antarctica is also under threat from exotics.  However, non-indigenous species are not always harmful to local ecosystems; read: Alien giant tortoise helps restore ecosystem and Invasive species: guilty until proven innocent?