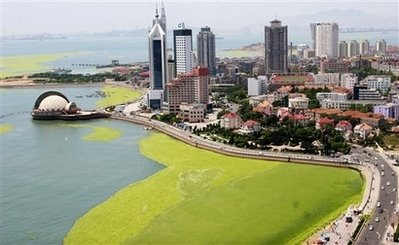 In South Africa, we are highly dependent on surface water (rivers and dams) for our daily water supply.  Pollution of these water bodies can have serious effects such as eutrophication and the presence of algal blooms.

Nutrient enrichment (eutrophication) remains one of the leading causes of water quality impairment in the world.  Agricultural and urban runoff, municipal and industrial wastewater effluents, and septic tank leach fields all contribute plant nutrients (such as phosphorus and nitrogen compounds) as well as other pollutants which eventually end up in our rivers and dams.

Water bodies that are eutrophic experience and increase in algae, especially cyanobacteria.  Cyanobacteria (also known as blue-green algae) are organisms with some characteristics of bacteria and some of algae.  They are natural inhabitants of many inland waters, estuaries and the sea.  A large mass of cyanobacteria in a body of water is called a bloom, appearing blue-green in colour.  These blooms are not only aesthetically unpleasant but also release bad odours.

Extreme and prolonged eutrophication leads to the deterioration of water quality, taste and odour problems, oxygen depletion and a decline of many of the more desirable fish species.  The resultant prolific growth of algae also disrupts water treatment which makes water more expensive and difficult to treat for drinking purposes.

Records of animal poisoning incidents attributed to cyanobacteria date back to the 1920’s when mass mortalities of livestock were reported at pans in the north-eastern Free State and south-eastern Transvaal (Mpumalanga).  Farmers referred to the condition as ‘pan sickness’ and although veterinary officers from Onderstepoort suspected algal poisoning, it was only until after the construction of the Vaal Dam in 1938 that the causative link could be confirmed.  As the Vaal Dam flooded low-lying farmland, eutrophic conditions ensued which triggered a bloom of cyanobacteria.  This resulted in the deaths of thousands of animals on farms adjacent to the dam during the summers of 1942 and 1943.  Cases of wildlife, livestock, fish and birds continue to be reported to this day. 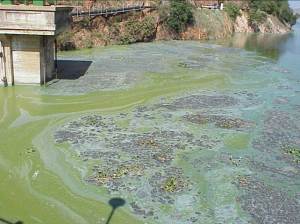 The Vaal Dam as well as other South African dams known to be eutrophic (including Hartbeespoort, Rietvlei and the Roodeplaat dams) are monitored regularly for signs of algal blooms.  Unfortunately, as the population grows and industrial and agricultural activities expand, incidents of pollution and eutrophication are on the increase too.

Remediation programmes have had mixed success.  The Harties Metse A Me programme at Hartbeespoort Dam includes resource management plans and water usage; a monitoring programme to ensure that water quality issues are identified and addressed; restoring shoreline vegetation and the placement of booms on the dam to assist with the physical removal of algae as well as water hyacinth– an alien water weed.