By admin on October 23, 2010 in water scarcity, water shortages

From Georgia to California, scarce water a threat to both environmental and financial security 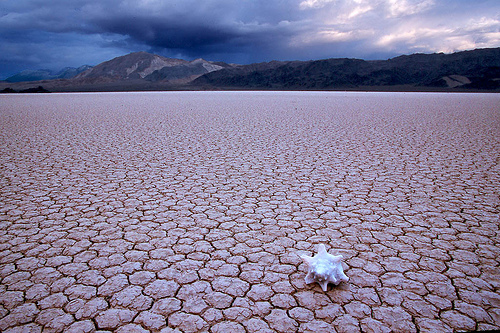 An economic study released yesterday on ongoing and worsening water shortages in municipalities from Georgia to California is sending a warning signal to the investment community and highlighting the link between environmental and financial security.

About 4 in 5 Americans get their water from public water utilities, and public power utilities provide electricity to 45 million people. The two industries are closely linked: power plants are responsible for 41% of national freshwater withdrawals, while water companies depend on electricity to transport water from reservoirs to homes.

“Investors should treat water availability as a growing credit risk,” said Mindy Lubber, the President of Ceres, in a news conference. “Ample, long-term water supplies are not a guarantee, and (they are at risk) in many parts of the country.”

The report was released by Ceres, a national network of investors and environmentalists working to integrate sustainability into capital markets, and co-authored by PricewaterhouseCoopers and Water Asset Management.

On the Colorado River, the water level in Lake Mead has fallen to historic lows, threatening water deliveries to Arizona and Nevada. In the Southeast, a court ruling could cut nearly 40 percent of Atlanta’s water supply by 2012.

Every year, investors spend billions of dollars to finance public water and electric utilities. These projects are funded through municipal bonds, which work like loans that must be repaid over time.

Municipal bonds are scored based on their credit risk, a measurement of how well the utility can repay its debts. However, credit rating agencies don’t account for factors such as drought or climate change, said report author Sharlene Leurig.

For example, Los Angeles Department of Water & Power received a high credit score from ratings agencies despite its dependence on the Colorado River. Water levels on the river have fallen so low that the Hoover Dam could stop generating power by 2013—but this potential risk is not reflected in the utility’s credit rating, according to the new report.

Bruce Kahn, director and senior investment analyst at Deutsche Bank’s climate change unit, praised the report for highlighting hidden risks. “In recent years, investors like ourselves have been asking how to factor climate change trends into investments,” said Kahn, who also served as an expert reviewer for Ripple Effect. “This report is a first step in the right direction.”

Lubber of Ceres stressed that the report does not suggest lowering the credit rating of any particular municipal bond. “(It’s) merely highlighting the need to take water scarcity into account.”

The report focused on 8 public utility bonds from water-stressed regions of the country: Arizona, California, Texas, Alabama and Georgia. According to credit agencies like Moody’s, Standard and Poor’s and Fitch Ratings, all these utilities scored well in terms of credit risk.

“Those agencies are looking at a future that looks just like the past.” said Leurig. They are using “cursory analyses” that don’t account for environmental or regulatory stresses.

The Ripple Effect seeks to establish a more accurate picture of risk. Using a model developed by PricewaterhouseCoopers, the report gave each utility a “water risk score” based on analysis that incorporated droughts, climate change scenarios, and water demand projections from 2011-2030.

“By coupling the water risk scores with other financial information already available in credit rating opinions and bond documents, investors can gain a more complete picture of a bond’s total risk profile,” wrote the authors of the report.

Los Angeles received the highest water risk score. The fast-growing city relies on the Colorado River, which is facing its 11th year of drought. The report concluded that the city could face undersupply from all sources by as early as 2013.

Atlanta, which has seen its water rights slashed by a federal ruling, had the second highest risk, followed by Glendale, Arizona which only has junior rights to water on the Colorado River and limited reservoir storage facilities.

Dallas, Texas received the lowest water risk score, but neighboring Tarrant County, which uses the same water supply (Trinity River), had a much higher risk. That’s because Tarrant County relies more on surface water storage, which is vulnerable to drought.

PowerSouth Energy Cooperative, an electric utility in Alabama, was at high risk due to warming temperatures. The utility may face temporary shutdowns if river water becomes too warm to cool the coal-fired power plants.

Regardless of the individual scenarios, Leurig said public utilities need to improve disclosures of water-related risks in order for public utilities to maintain trust with the investment community.

“Water shortages are happening now, and they have an impact,” said Lubber. Investors are threatened by these trends, and the financial community needs new models and better disclosure to deal with the coming changes.

Although written in the United States, this article is relevant world over and especially in South Africa.  Developing countries such as India have realised that water scarcity could cripple their economy.  Without water security our economy will falter and there is always the possibility of conflict and war in times of severe water scarcity. Water quality management in South Africa requires prioritization if we are to weather the coming water crisis and prevent water shortages to millions of South Africans.  Individuals and businesses need not wait on governments to implement water conservation strategies; rainwater harvesting and greywater recycling will go a long way to ease the pressure off our water resources (watch a short video on the benefits of rainwater harvesting).

Contact us for a FREE QUOTE on a solar water geyser, rainwater harvesting system, gray water system or water tank (we are authorised JoJo Tanks dealers and supply and install the full range of JoJo water tanks and JoJo tank stands).  Our water tank prices are hard to beat in the Mpumalanga & Limpopo Lowveld as well as the rest of South Africa (we also supply high quality Atlas Plastics water tanks and other Atlas products on request).