By admin on June 4, 2010 in carbon footprint, environmental footprint

Africa’s first football World Cup will generate 2.75m tonnes of carbon emissions, one of the biggest environmental impacts of any sporting event in history, a study has found.  The finals in South Africa are expected to have a carbon footprint eight times that of the 2006 World Cup in Germany, even before long-haul international travel is taken into account. 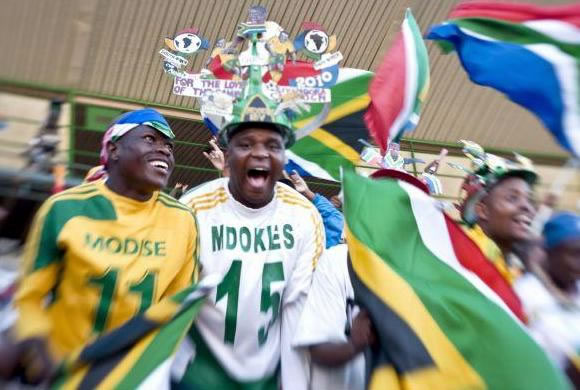 The main reasons for the discrepancy are the vast distances between South Africa’s host cities and the lack of a green transport infrastructure.

The estimated output from South Africa is 896,661 tonnes of carbon dioxide, according to the optimistically entitled Feasibility Study for a Carbon Neutral 2010 Fifa World Cup, commissioned jointly by the South African and Norwegian governments. Another 1,856,589 tonnes will result from fans travelling from around the world, making the World Cup’s footprint the biggest of any major event aiming to be “climate neutral”, the report said.

It cites the geography of South Africa as the main culprit, forcing players, officials and supporters to travel great distances between the 64 matches spread across nine host cities. South Africa is five times the size of the UK. The distance from Cape Town to Johannesburg is 880 miles, the same as London to Warsaw, and it would take about 17 hours to drive.

South Africa’s transport systems are also less eco-friendly than in many countries. “For inter-city transport … distances between matches in South Africa are much greater than in Germany, and the lack of high-speed rail links means that most visitors will fly multiple times between matches, leading to much higher transport emissions,” the report said. Within cities, they will use hired cars or buses, because there is no underground or light railway alternative.

But getting there will be the biggest contributor to the total of 2,753,250 tonnes of carbon. International transport represents 67.4% of emissions, intercity transport 17.6%, intracity transport 1.4%, stadium construction and materials 0.6%, stadium and precinct energy use 0.5%, and energy use in accommodation 12.4%.

It called for the early implementation of carbon offset programmes from football’s governing body, Fifa, the local organising committee and the South African government. These should be visible during the event to “maximise the contribution to public awareness”.

The local organising committee responded with a “green goal” initiative. It said the construction of Soccer City stadium, the venue for the opening ceremony and the first and final matches, used thousands of tonnes of builders’ rubble from the demolition of parts of the old FNB stadium.

Waterless urinals will be used in the stadium and the pitch will be irrigated exclusively with non-drinkable water, the organising committee said. Waste reduction will be pursued, with reusable cups and limited use of food containers.

Buyelwa Sonjica, South Africa’s environmental affairs minister, told parliament: “Some progress has been conducted toward processes for offsetting the footprint. However, even the footprint on its own is huge in comparison to the 2006 Fifa World Cup footprint. At least three of the nine host cities have considered the implementation of bicycle lanes.” 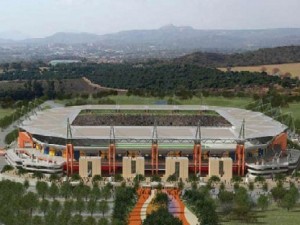 The environmental impacts for events such as the soccer World Cup are inevitably considerable. As always, the negative impacts need to be weighed against the positive impacts such as economic and social upliftment of the people of South Africa. Hopefully some of the money generated by this international event will be directed to conserving our natural resources.  New stadiums have huge environmental footprints; the building of the Mbombela Stadium in Nelspruit was not without ecological problems.  However, the positive impacts of the 2010 FIFA World Cup for South Africa are undeniable.  Water saving measures such as waterless urinals will help to reduce the event’s water footprint.