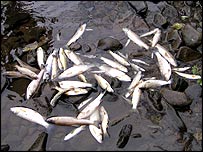 Used since the early 1900s, chlorine is one of the most widely produced industrial chemicals. About 10 million metric tons are manufactured in the US each year – $72 billion worth. Annually, approximately 5%, or 1.2 billion pounds of the chlorine manufactured is used for wastewater treatment and drinking water “purification.” The lethal liquid or green gas is mixed with the wastewater from sewage treatment plants in order to kill disease-causing microorganisms before the water is discharged into streams, lakes, rivers, and seas.  It is also added to household drinking water via household and municipal water treatment systems. Chlorine kills microorganisms by damaging their cell membranes, which leads to a leakage of their proteins, RNA, and DNA.

Chlorine (Cl2) doesn’t exist in nature. It’s a potent poison which reacts with water to produce a strongly oxidizing solution that can damage the moist tissue lining of the human respiratory tract. Ten to twenty parts per million (ppm) of chlorine gas in air rapidly irritates the respiratory tract; even brief exposure at levels of 1,000 ppm (one part in a thousand) can be fatal. Chlorine also kills fish, and reports of fish kills caused chlorine to come under the scrutiny of scientists in the 1970s.

The fact that harmful compounds are formed as by-products of chlorine use also raises concern. In 1976, the US Environmental Protection Agency (EPA) reported that chlorine use not only poisoned fish, but could also cause the formation of cancer-causing compounds such as chloroform. Some known effects of chlorine-based pollutants on animal life include memory problems, stunted growth and cancer in humans; reproductive problems in minks and otters; reproductive problems, hatching problems, and death in lake trout; and embryo abnormalities and death in snapping turtles. 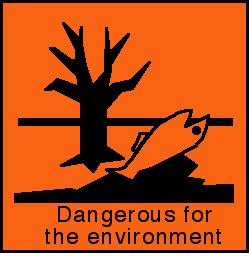 Protect the environment from chlorinated water

In a national study of 6,400 municipal wastewater treatment plants, the EPA estimated that two thirds of them used too much chlorine, exerting lethal effects at all levels of the aquatic food chain. Chlorine damages the gills of fish, inhibiting their ability to absorb oxygen. It also can cause behavioral changes in fish, thereby affecting migration and reproduction. Chlorine in streams can create chemical “dams” which prevent the free movement of some migratory fish. Fortunately, since 1984, there has been a 98% reduction in the use of chlorine by sewage treatment plants, although chlorine use continues to be a widespread problem because a lot of wastewater plants are still discharging it into small receiving waters.

If water contains a lot of decaying materials, free chlorine can combine with them to form compounds called trihalomethanes or THMs. Some THMs in high concentrations are carcinogenic to people. Unlike free chlorine, THMs are persistent and can pose a health threat to living things for a long time.

Effects of chlorine on fish and aquatic life

The table shows how chlorine affects fish and aquatic organisms. It is important to realize chlorine becomes more toxic as the pH level of the water drops. And it becomes even more toxic when it is combined with other toxic substances such as cyanides, phenols and ammonia.

Phenols are organic chemicals produced when coal and wood are distilled and when oil is refined. Phenols are found in a number of products—from organic wastes to sheep dip. Although phenols are very toxic, dilute solutions of a phenol (carbolic acid) are used as a disinfectant.

The Guidelines note that chlorination practices vary widely around the world, as do recommended free chlorine levels. The Guidelines state that adequate disinfection should be achieved with a free chlorine level of 1 mg/l throughout the pool. They further recommend that levels not exceed 3 mg/l in pools and 5 mg/l in hot tubs. The range of 1- 3 mg/l for pools is somewhat lower than the range of 2-4 mg/l recommended by the Association of Pool and Spa Professionals in the U.S. [and endorsed by the Water Quality & Health Council]. 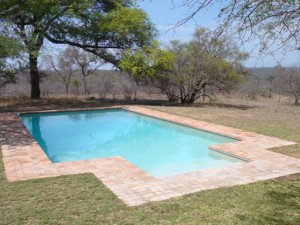 Chlorine in pool backwash water, whether originating from granulated chlorine or from Sodium Chloride (salt), is bad for the environment.  It should be prevented from entering our waterways, freshwater and oceans.  Tiny concentrations kill many aquatic lifeforms and when combined with other pollutants and certain natural decomposing substances, very toxic compounds may be formed.  Please  look at the table above and compare- acceptable chlorine levels in pools are 2-4mg/l; even a ‘low’ level of 1mg/l kills  all the animals listed on the table! Chlorinated water also kills plants and microorganisms in the soil.  Alternatives to chlorine/salt pools do exist, e.g. UV sterilizers or ozone systems.  However, these systems are expensive and are sometimes prone to be unreliable due to complexity.  A simple, cost-effective and eco-friendly solution can be had by installing Water Rhapsody’s Poolside Tank.  This system treats, cleans then reuses pool backwash water so that none of it enters the sewers or the environment.  The Poolside Tank also saves hundreds of litres of water each month (see product demo).  The Poolside Tank can be located near the pool pump or hidden somewhere else and connected by underground pipes.  See an earlier post for other swimming pool water saving tips.

Why Use Greywater for Irrigation?
The 3-pronged Approach to Water Shortage Issues