Northern Cape solar resources among the best in the world

The 5 000 MW solar park, which government is planning to build near Upington in the sun-drenched Northern Cape, would have some of the best solar resources in the world, the Stellenbosch University said on Friday. 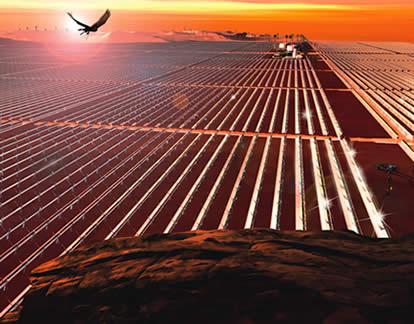 DNI is used to predict the output of concentrated solar power (CSP) stations where the receivers or heliostats track the sun throughout the day, while the OTI value predicts the yield of stationary, or fixed tilt, photovoltaic panels.

The university said that the averaged values at the Upington site were very high, comparing it to Spain, which hosts a number of CSP plants, where typical DNI values were between 2 000 kWh/m2 and 2 200 kWh/m2 a year and North America where DNI was in the order of 2 700 kWh/m2 a year.

“The Northern Cape has been identified as an area with exceptionally high solar irradiance, higher than the areas in North Africa where the Desertec project may be implemented,” it stated.

The solar park is one of the Energy Department’s flagship renewable projects. NYSE-listed Fluor is assisting the State-owned Central Energy Fund to commission a feasibility study on the project, for which government had made R18-million available.

The site is located very close to Eskom’s planned 100 MWe CSP station at Olyvenhoutsdrif, which would be commissioned in 2016.

The Stellenbosch University’s Centre for Renewable and Sustainable Energy Studies used data on the solar potential of the area from Eskom and contracted Slovakia-based GeoModel Solar to analyse the measured data along with 17 years of satellite derived solar data, to predict the solar resource available at the solar park.