Wind, Water & Sun can Power Our 240 Million Cars & Everything Else 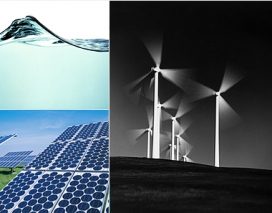 Our Promising Future of Renewable Energy

The cleanest solutions to global warming, air pollution and energy security are wind, water, and solar power (WWS).  As Dr. Mark Jacobson walks me through the numbers of his, Dr. Mark Delucchi, and their teams’ multi-year study, the renewable energy solution stands out as the clear winner. Dr. Jacobson is a Professor of Civil and Environmental Engineering at Stanford University and an advisor to the U.S. Department of Energy.

Wind power has been doubling in capacity about every three years. It’s now over 200 GW; in 3 years it will be over 400 GW. 36 U.S. states generate enough wind power to replace one or more coal or nuclear power plants.  U.S. wind grew 39 percent in recession year 2009. In a growing number of global locations from Hawaii to Denmark, wind is the least expensive way to generate power. Their WWS study includes both on-shore wind power, which is plentiful from Texas through the Dakotas and offshore with enormous potential along our Pacific and Atlantic coasts and our Great Lakes.

Solar includes the photovoltaics that cover homes and the faster growing PV that covers commercial roofs. It also includes the grid-scale PV and concentrating solar power (CSP) that generates the equivalent power of a natural gas or coal plant. The water in WWS includes hydropower, our most widely used source of renewable energy, and geothermal power, which uses steam to drive turbines.  Water also includes emerging, wave and tidal power generation.

At the same time that we see high growth of WWS, especially wind and solar power, we are also experiencing transformational growth of electrified transportation. Mark Jacobson points out that electric propulsion is four times as efficient as internal combustion. Health concerns, energy security, and economics make combustion a loser. Every year we see more battery electric vehicles (BEV), electric rail, and even hydrogen fuel-cell vehicles (HFCV) such as the 20 buses that transported 100,000 visitors during the last Winter Olympics.

From a technology standpoint WWS can meet all of our needs in 20 to 40 years.  How far and how fast we move to reduce greenhouse gas and health-damaging emissions depends more on politics, sunk-costs and inertia than on what is feasible.  Faced with the growing threats of global warming such as heat waves, water scarcity, failed food production, continued growth of WWS is essential.

By 2015, several forecasts put one million to 1.5 million electric cars on the U.S. road. Having recently purchased a Nissan Leaf, I believe the forecast. My electricity bill is a fraction of what I paid at the gas station to put on the same miles. With current incentives, my electric car cost $22,000. Prices are likely to decline for electric cars while gasoline prices are forecasted to increase.

Mark Jacobson has driven his Tesla Roadster 16,000 miles. He charges his Tesla with the same solar photovoltaics that power his entire house. By going

to energy efficient electric appliances and solar water heating, their utility bill is at the minimum needed for a couple of gas burners on the stove for a few favorite meals. Mark and his wife don’t just talk about the transition to WWS – they live it.

With the 240-mile range of his Tesla Roadster, range has rarely been an issue. Yes, on a trip to Sacramento, he had to plug his Level 1 charger into the outlet in his motel room, extending the cord out the window to his electric car. On one trip to Modesto, he had to convince his hotel manager to turn-off their decorative water fountain so that he could use the fountain’s electric outlet to trickle charge overnight. The vast majority of the time, he is riding on sunlight.

Public charging infrastructure is expanding, renewable energy growth continues, and lithium battery prices fall as gasoline and diesel increase in cost. Our cars are getting cleaner and more electric.

Jacobson and Delucchi looked at the life cycle impacts of different types of cars and various fuels. Alternatives were ranked according to their impacts on global warming, pollution that impacts our health, water supply, land use, security issues such as terrorism and other impacts. The study evaluated nuclear, coal and natural gas with sequestration, advanced biofuels, and included hybrid and plug-in hybrids vehicles. Our best scoring alternatives, in the following order, are electric vehicles using renewable energy:

Pure battery-electric cars were the big winner in their study with most of their power coming from wind and solar charging. Hydrogen from wind electrolysis scores best for vehicles requiring extended range such as buses, ships using hybrid hydrogen fuel cell propulsion, and aircraft using liquefied hydrogen combustion. Mark Jacobson’s articles for Scientific American, Energy Policy, testimony to Congress and the EPA, and more can be accessed at his Stanford website.

The study used existing technology that can scale to broad commercial deployment. At first glance, growing to 11.5 TW of WWS globally looks impossible, a closer look shows that many of the study’s assumptions are conservative because only today’s technology is considered. The shift to electric vehicles powered with renewable energy will be easier if vehicles are built with much lighter materials, or if we succeed with breakthrough battery chemistry such as lithium air. The electric car/renewables scenario timetable also improves as U.S. drivers continue their trend of driving fewer miles thanks to record urban density, transit, flexwork, and aging boomers.

In Energy Policy Jacobson and Delucchi write, “”Although we focus mainly on energy supply, we acknowledge and indeed emphasize the importance of demand-side energy conservation measures to reduce the requirements and impacts of energy supply. Demand-side energy conservation measures include improving the energy-out/energy-in efficiency of end uses (e.g., with more efficient vehicles, more efficient lighting, better insulation in homes, and the use of heat exchange and filtration systems), directing demand to low-energy use modes (e.g., using public transit or telecommuting instead of driving)….”

Vehicle to Grid and other Storage

A 100% WWS United States must deal with the variability of wind and solar. This is an important reason that wind, water, and solar power are all needed to meet our 24/7 demands. Large-scale deployment of wind and solar will require a Supergrid network of high-voltage lines that can move electricity from mid-American wind farms and desert solar plants to cities and industry. With a national Supergrid, WWS is largely achievable without storage and even without using pricing and demand response (DR) to make energy demand more level. He walked me through a California study that he co-lead in 2005 showing that WWS would meet 99% of California needs, even during peak hours on a burning summer day. With our growing use of DR, intelligent energy management, and storage, large scale WWS can be deployed more quickly.

Byron Shaw of GM quipped, “Cars are like cats, they sleep 22 hours per day.” Most cars are parked when the grid faces peak demands. Why not let people make money charging at night at a discount and sell electricity back to the grid at peak at premium pricing? The model works well for individuals and businesses with solar power.

Jacobson and Delucchi write, “The use of EV batteries to store electrical energy, known as ‘‘vehicle-to-grid,’’ or V2G, is especially promising, albeit not necessarily easy to implement…. In order for V2G systems to provide operating reserves to compensate for hourly variations in wind power (again when wind power supplies 50% of US electricity demand), 38% of the US LDV fleet would have to be battery-powered and be on V2G contract.”

Yet 38 percent will not need to sign V2G contracts because V2G is just one of many ways to store wind and solar power until needed. Utilities currently use nighttime wind energy to pump water uphill. The next day at peak hours the water flows downhill driving generators. Grid-scale batteries, compressed air storage, and storage towers coupled with concentrating solar plants are all in early stage use.

Easier than It Looks

Meeting 100 percent of our energy and transportation needs with wind, water, and solar power seems as daunting as putting a man on the moon. Mark Jacobson and Mark Delucchi state in Energy Policy, “With sensible broad-based policies and social changes, it may be possible to convert 25% of the current energy system to WWS in 10–15 years and 85% in 20–30 years, and 100% by 2050. Absent that clear direction, the conversion will take longer. “

Their WWS scenario can meet our electricity, heat, and transportation needs. The technology is here, but it will take considerable political will to overcome the subsidies, market barriers, and change required to meet all needs with WWS.

In several ways, the transition will be easier in the United States. We already have more vehicles than people with drivers license, in contrast to the explosion of middle class drivers in Asia now buying their first car.

In the United States we have achieved strong growth of wind and solar. Now we are successfully deploying smart grids and electric cars. WWS does not require technology breakthroughs, yet dramatic innovation is likely in the next two decades in battery technology, solar efficiency, and urban mobility that requires fewer car miles.

Jacobson and Delucchi only assume reasonable progress in energy efficiency. New lighting technology, such as LED, can cut 80 percent of lighting’s 27 percent of total electricity demand. Making electricity cheap during vehicle charging hours and more expensive during peak hours will make a huge difference. In the United States, 80 percent WWS is achievable in the next two or three decades. 100 percent is like putting a man on the moon – it looked impossible until we did it.

Perhaps the Saudi Prince’s fears that we will find viable alternatives to oil are well-founded.  The quicker we embrace, wind, water and solar energy, the better for the environment.  However, we must acknowledge that the world is addicted to oil; read Why is it so difficult to wean ourselves from fossil fuels?