More than 900 new alien species have been encountered in the coastal environments of the eastern Mediterranean Sea in recent decades, including the poisonous pufferfish. The invasion of alien species has had the consequence that the whole food chain is changing, while there is a lack of knowledge on which to base relevant risk assessments, a four-year study conducted at the University of Gothenburg shows.

“The Mediterranean is the world’s most invaded sea, but our understanding of how alien species affect ecosystems is inhibited by a lack of basic knowledge of the 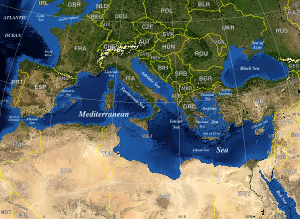 animal and plant communities on the coast. Once species have become established in the Mediterranean it is almost impossible to eradicate them,” says Stefan Kalogirou of the Department of Marine Ecology at the University of Gothenburg.

When the Suez Canal was completed in 1869, a corridor was created for the spread of alien species to the Mediterranean Sea, which is now undergoing great changes in animal and plant communities. In recent years, regular reports of alien species from several of the coastal environments of the eastern Mediterranean have caused concern over what will happen to indigenous species and ecosystems.

Over a period of four years Kalogirou, in cooperation with the Hellenic Centre for Marine Research, has studied the structure and function of fish communities in sea-grass meadows and on sandy bottoms in two important coastal environments on the island of Rhodes in south-eastern Greece. This has provided important insights into invasion biology, that is to say possible ecological consequences of alien species in the food chain.

“The results show a clear ecological impact when alien species either become dominant, like pufferfish, or are piscivores, like barracuda and cornetfish. It is evident that the food chain is being restructured, but the lack of previous studies limited our conclusions.”

The poisonous pufferfish is one of the alien species that have recently been introduced. The pufferfish toxin, tetrodotoxin, causes muscle paralysis, which can lead to respiratory arrest. In the worst case the outcome can be fatal. In the coastal environments that Kalogirou has studied, the pufferfish has become a dominant species, which has led to both ecological and social effects. 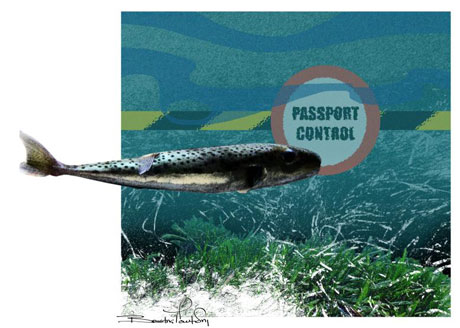 “There does seem to be an awareness at the European level of how quickly species spread into new areas, but there is a lack of basic knowledge of monitoring methodology, specific life characteristics of alien species and risk assessments. The impact of alien species, known as biological contamination, is something that must be taken into account in environmental impact assessments,”Kaligirou notes.

This is another example how man’s actions can destroy or degrade the functioning of an ecosystem.  While there was probably nobody thinking about the consequences of alien invasive species in 1869 (when the Suez Canal was completed), today we should know better.  Modern examples of how alien species can become an environmental headache are tilapia farming, alien species in Antarctica and water hyacinth.  With proper research and exhaustive environmental impact studies, exotic species can sometimes be safely used to restore ecosystems and control other destructive alien species, for example, the introduction of Aldabra giant tortoises to an island, called Ile aux Aigrettes, off the coast of the island nation of Mauritius.