The Future of Water

10 Things That Will Change How You Think About Water

Water on earth may be more scarce than you may think. Charles Fishman, author of “The Big Thirst,” talks about what people should do to help secure the world’s water future. 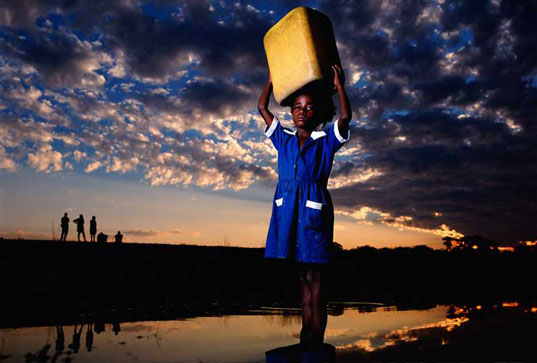 Jeremy Hobson: More bad news for Texas which is in the middle of the worst drought since the 1960s. Forecasters are expecting less-than-average rainfall over the next three months. Officials say two-thirds of the wheat fields in Texas are in poor condition. And the drought has almost doubled global wheat prices in the past year.

This is yet another reminder of just how much we rely on water. And we’re going to talk about that now with journalist Charles Fishman. He’s just written a book about water called “The Big Thirst” and he joins us now. Good morning.

Hobson: So you say we’re on the verge of a modern water revolution. Tell us what you mean by that.

Fishman: We’re at the end of the golden age of water in the developed world, as I think of it: water that has been unlimited, and essentially free. We will start using the right water for the right price and the right purpose. We won’t clean water to drinking water standards and then flush our toilets with it or water our lawns with it.

Hobson: Well we may think think that the water is free, but as you write, there have been many cases when the water has almost run out in big areas. And there’s been a lot of behind-the-scenes stuff going on to try to get water to the people, which is anything but free.

Fishman: Barcelona, Spain, came so close to running out of water a couple years ago that they actually tried to bring water in by ship. The first ship supplied 32 minutes of water, and the second ship supplied 62 minutes of water. So you have to think long-term. We’re very touchy about reusing waste water and I think we need to sort of think differently about that. All the water on earth has been through a dinosaur kidney. Every bottle of Evian you drink from is Tyrannosaurus Rex pee. All the water on earth has been here for 4.5 billion years. It’s all toilet-to-tap at some level.

Hobson: Let’s talk about a place that, if you really think about it, shouldn’t exist because of the lack of water, and that is Las Vegas. How bad are things for Vegas when it comes to water?

Fishman: Well, Las Vegas relies, for almost all its water, on Lake Mead. And Lake Mead is more than half empty. So Las Vegas is watching its water supply disappear. At the same time, despite the fountains and the lagoons, Las Vegas is actually one of the most water-smart cities in the country. The city as a whole today uses exactly the same amount of water as it used 10 years ago, even though the population has increased by 50 percent.

Hobson: After spending so much time studying water, tell us what you think the number one thing that needs to be done in this country is to secure our water future.

Fishman: This is a little hard to quantify but I think the number one thing people need to do is pay a little more attention to water. Most of us have no idea where our actual water comes from, what’s required to get it to us. It would be OK to appreciate the water a little more.

Hobson: Charles Fishman, author of a fascinating new book called “The Big Thirst.” Thanks so much for being with us.

Fishman: Thanks for having me, Jeremy.

It really doesn’t make sense to use drinking water for flushing the toilet or watering the garden. Greywater is ideal for these purposes, even better than clean water for irrigation purposes (grey water contains many nutrients that plants require).  It’s all too easy for people in the developed world to simply turn on a tap to get clean, safe drinking water.  There are people in South Africa that drink water of lower quality than what we discard as gray water.  Perhaps it will be a good thing when the cost of water gets to a point where people will think twice about wasting it.  However, rich or poor, if there is no water, money won’t help!  Is water a basic human right?

Also see 10 Things That Will Change How You Think About Water by Charles Fishman.