Rowbike Offers The Health Benefits Of Rowing, No Water Required

How Much Radiation is ‘Safe’? 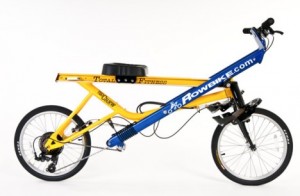 Bicycles have been called the most efficient self-powered means of transportation. So why would anyone want a Rowbike? And, the Rowbike has been around for 15 years. Why the sudden spurt of interest on the internet?

The answer to the first question is that rowing is fabulous exercise that works the entire body; the Rowbike promises twice the workout of cycling in half the time. It isn’t about burning calories efficiently, it is about the exercise. The answer to the second is that Hammacher Schlemmer, the purveyor of overpriced junk, sent out a press release “introducing” the Rowbike.

So what is it?

I have not been on a Rowbike, but row on the water in a Hudson single in summer and on a rowing machine in winter. For transportation I cycle, so I know something of both. As everyone knows, a bike takes the linear force of a leg extending and turns it into a circular motion with the pedals. It actually isn’t all that efficient as the stroke of the leg is pretty short. However, once the force is applied to the pedals it is very efficiently transferred to the wheel.

In rowing, you get a full leg extension, from being curled up at the catch as I am here, pushing as hard as you can against the footstops. After you run out of leg you add some distance with your back and then your arms. The power is transferred to a linear action of levering those oars through the water. Logically, good rowers are tall; they get a longer stroke, which is why I am such a terrible rower. But it is still great exercise, using every part of the body. It is also really efficient, with no conversion of linear to rotary motion; it is a simple lever action with one moving part at the fulcrum of each oar.

In the Rowbike, that linear motion is transferred through a cam mechanism, converting it to rotation, but it cannot do it as efficiently as a regular bike; otherwise, getting twice the workout would make you go twice as fast and twice as far.

Rowing is also really hard to do right; if you “rush your slide” or go back to the starting position, the “catch”, too quickly, you kill the forward motion. If you use too much of your back, you can injure yourself. Rowing requires a lot of coaching if you are going to get anywhere.

The thing is pretty complicated, with the handlebars steering through cables. Scott Olson, who also invented Rollerblades, did a terrific job of engineering, managing to make a rowing machine that moves. But I suspect that for anyone other than a crazed rower who is bored looking at his speed coach display, and wants to “exercise amidst ever-changing scenery and terrain outdoors to keep workouts challenging and fresh”, you should get a bike.

But I could be underestimating it; I found one website describing a 25 year old from Toronto who rowed all the way to Halifax on one.

The skyrocketing oil prices and resultant climbing fuel prices should be enough to make us all look at greener modes of transport, if only for the financial savings.  Bicycles are a great healthy way to commute short(ish) distances; the Rowbike may just be for you if you’re looking for rock-hard abs too!