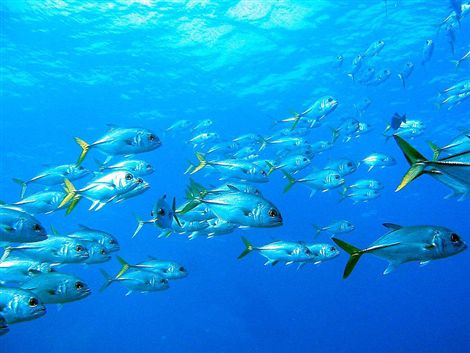 Global marine environment is seriously threatened by pollution from massive amounts of phosphorus, a fertiliser widely used in agriculture, as well as billions of pieces of plastic, according to a recent UN report.
Phosphorus pollution, along with other uncontrolled discharges, such as nitrogen and sewage, are linked with a rise in algal blooms, which harm water quality, poison fish stocks and undermine coastal tourism, stressed the United Nations Environment Programme’s (UNEP) 2011 yearbook, published during this week’s global ministerial environment forum in Nairobi.

UN experts say both phosphorus discharges and new concerns over plastics underline the need for better management of the world’s wastes and improved patterns of consumption and production – both of which are among topics to be addressed in global preparations for the Rio+20 Earth Summit in May 2012.

Phosphorus is estimated to flow from land to the marine environment in volumes of around 22 million tonnes a year. The report also points to the enormous opportunity this represents for recycling wastewater.

In the mega cities of the developing world, up to 70% of these wastewaters – laden with nutrients and fertilisers such as phosphorus – are discharged untreated into rivers and coastal areas.

In contrast, Sweden is aiming to recycle 60% of the phosphorus in municipal wastewater by 2015.
According to the UN, demand for phosphorus has rocketed during the 20th Century, and the body has decided to highlight the issue in its 2011 yearbook partly because finite reserves of phosphate rock could soon run out.

Worldwide use of fertilisers that contain phosphorus, nitrogen and potassium increased by 600% between 1950 and 2000, and it is likely to increase further as developing country populations grow and the share of dairy and meat in the global diet increases, the report notes.

Another issue highlighted this year is the environmental impact of plastics entering the world’s oceans. In particular, the UN flags “persistent, bio-accumulating and toxic substances” associated with plastic marine waste as “a new and emerging concern”.

New research suggests that consumer plastics break down into small fragments once they enter the oceans, alongside plastic pellets discharged by industry. Pellets, which are small granules used in the manufacture of plastic products, are being introduced to oceans through accidental releases and poor management of industrial waste.

These tiny fragments of plastic may absorb a range of toxic chemicals, such as polychlorinated biphenols (PCBs) or the pesticide DDT.
These pollutants are linked to cancer, problems with reproductive processes and mutagenicity in both humans and wildlife, the UN said.

North Americans and Western Europeans use around 100kg of plastic materials, including single-use items such as bottles, carrier bags and food packaging, per person per year – an amount which, according to the UN, is likely to increase to 140kg by 2015.

As part of its proposed solution, the UN calls changes to collection, recycling and re-use of plastics to be phased in over time.

“If plastic is treated as a valuable resource, rather than just a waste product, any opportunities to create a secondary value for the material will provide economic incentives for collection and reprocessing,” the yearbook points out.

It’s ironic that Phosphorus is polluting our water systems in such vast quanitities yet this element is in high demand for fertilizer- basically if there is no phosphorus, there’ll be no food.  See Peak Phosphorus – What does this mean? for some insight into how important it is to our continued survival.

Contact us for a FREE QUOTE on a solar water geyser, rainwater harvesting system (see rainwater FAQ), gray water recycling system or water tank (we are authorized JoJo Water Tanks dealers and supply and install the full range of JoJo water tanks and JoJo tank stands).  Our water tank prices are hard to beat in the Mpumalanga & Limpopo Lowveld.