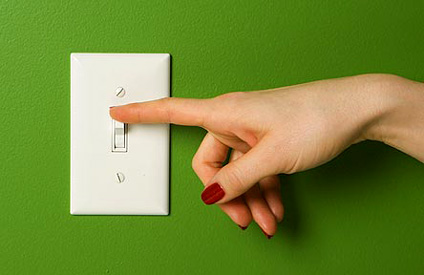 The earthquake and tsunami in Japan have demonstrated the dangers of nuclear energy (or the success, depending on who you ask). The disaster also has reminded us just how dependent we are on electricity. But what if the power went out, or you knew it was going to go out soon, unless you started to conserve? Such is the topic of a new book by Alan Meier, a scientist in the Environmental Energy Technologies Division of Lawrence Berkeley National Laboratory.

The (free) book “Saving Electricity in a Hurry,” and was written by Meier while on leave at the International Energy Agency. It recalls a number of times in world history when people took action in response to energy shortfalls.

In 2002, for instance, the Tokyo Electric Power Company had to begin shutting down 17 nuclear power plants for emergency safety inspections.

What happened? Manufacturers switched their production schedules to lower-demand periods, the company launched a conservation campaign and people trimmed their use. In other words, less is more when more could mean nothing (as in a blackout). It didn’t hurt that Tokyo’s summer was cooler than expected, but still …

A later survey by the Center for Consumer Studies of Dentsu Inc. found that 80% of respondents claimed to have taken measures to reduce their electricity use during the shutdown, by dimming lights, raising the setpoint of air conditioners, and reducing air conditioning use.

Meier says Japan faces similar challenges in the aftermath of the March 11 earthquake and tsunami, with the loss of power from its nuclear facilities.

Could onlookers also learn from the examples in this book, including a 2008 power crisis in Juneau, Alaska?

It’s an interesting read. It’s based on responses to short energy shortfalls. How many people are willing to take steps to cut energy use when a crisis looms in the distance (ie., climate change)?

We shouldn’t need to have a looming crisis for us to take action; saving electricity saves money and helps the environment- what better incentives are there?  It seems that electricity has become too easy and convenient, we only realize how dependent we are when it’s gone.  See Simple Tips for Cutting your Electricity Bill and How to Survive without Electricity.