By admin on November 15, 2010 in water scarcity, water shortages 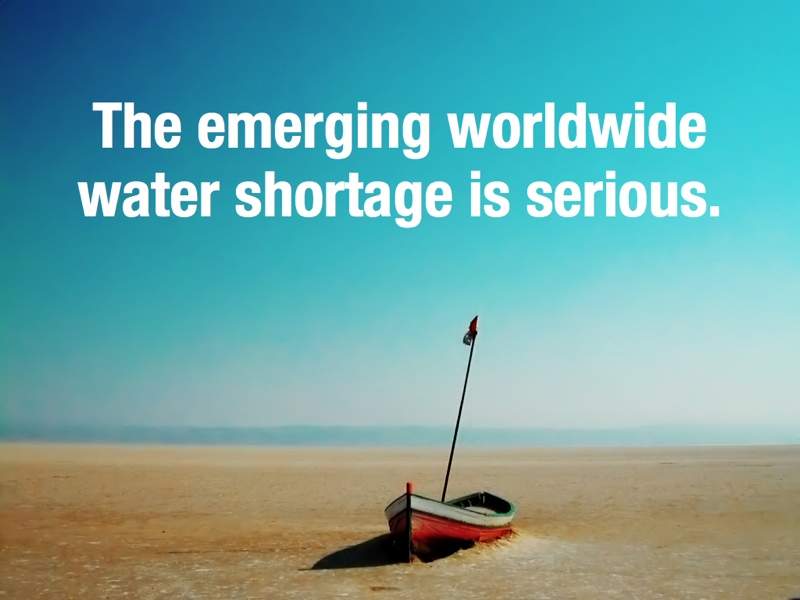 SAN FRANCISCO, CA — Current water constraints and looming threats of shortage and decaying infrastructure are basic facts of business life that few companies have fully absorbed, according to the Artemis Project.

To provide a reality check on the state of water and business, the Artemis Project — a consulting firm based in San Francisco that helps companies grapple with water challenges — tapped sustainability leaders at IBM, Intel and SAP for a webinar this week.

Water scarcity is “a worldwide issue even if your company’s headquarters are in an area where there’s plenty of water,” said Peter Williams, chief technology officer for Big Green Innovations at IBM. “If your supply chain reaches into areas that don’t have plenty of water, you have water risks just the same as if you were actually based there.”

To make his point, Williams reeled off list of water facts and statistics including:

Asked for his assessment of how the business world is responding to various water challenges, Williams said, “The SEC now requires reporting on water risks, but my hunch is that most companies have not internalized that level of risk.”

Williams also described a range of business responses that include “no interest in the issue,” “lip service,” and “an interesting interim phase I call lip service in-depth, which is where companies really mean to take action but they haven’t yet.”

There are a few far-sighted companies that are already taking action because their leaders realize the urgency of water issues and that it makes good economic sense to act now, or they have to manage water risk in their supply chain, Williams said. The next tier of businesses “absolutely get it and are at the point of taking action or have been (doing so), some for a considerable amount of years,” he said. Then there’s everybody else.

“A huge mass of companies, I think, are moving into the lip-service-in-depth stage, where they understand they have do something,” Williams said. “They haven’t really done it yet and they are actively casting around for what it is. Behind them, there’s an even larger tail of companies saying, ‘Yeah, yeah, of course we’re doing all this kind of stuff.’ ” Unfortunately, they’re not doing much of anything, he said.

Intel, however, is a firm that has made strides in reducing its use of water and Freeman outlined several of the company’s best practices. They include:

Intel’s environmental performance goals include reducing water use per chip below 2007 levels by 2012. The firm also has set water policy in concert with the company’s environmental stewardship commitment that directs employees to “consider both the short- and the long-term impacts to the environment and the community when making business decisions.

The company has invested $100 million in water conservation since 1998 and saved 36 billion gallons of water, about enough for 335,000 U.S. homes for a year, Freeman said, adding that the company has won recognition from the U.S. Environmental Protection Agency and the organization CERES for its efforts.

At SAP, whose software enables companies run their operations, “we cover the entire value chain from raw materials to end of life in most sectors of industries, and we have a very good understanding of how risk and opportunities are factoring into running businesses today,” Davis said.

In addition to gaining understanding of water issues, it is important to realize that water itself can be big business, Davis said. “Water is not only a business resource issue, it’s also a tremendous business opportunity,” he said. “It’s not just a risk to be managed.

Smart companies will not only tackle water issues that affect them, but will also look for ways to do so that give them market advantage, Davis and other panelists said.

In response to a question from the World Resources Institute’s Charles Iceland, the panel acknowledged the difficulty companies have in collecting sufficient data about water to figure out where they stand and what to do about it.

Iceland pointed out that WRI’s Aqueduct Project is designed to address that problem by providing a portal for companies to measure and map water risk around the world. (More information about the project is available at www. wri.org/aqueduct.)

However, after breaching the obstacles of water issue awareness and understanding, there still remains the problem of motivating companies to sink dollars into efforts in what continue to be tough economic times.

Williams at IBM, which helps clients around the world with water and other resource management systems, said there are short- and long-term gains to managing water. “From Intel’s point of view and IBM’s point of view and the point of view of companies like semiconductor manufacturers, water reuse and water recycling are essential factors in keeping our costs in line with our global competition, so there is a very direct and immediate ROI in hard green dollars from doing that,” he said.

“Clearly times are hard,” Williams continued. “It is not a good investment climate, but as you think about the ROI for investing in water, think laterally about the ‘R’ — in terms of risk reduction, in terms of brand reputation, in terms of stimulating process efficiency through changing some production techniques and so on. If you do that, you’ll generally find — as we have, as Intel has and as some of the early movers like Walmart and Dow have — that there is case for actually doing this.”

Source: GreenBiz
Saving water is not only environmentally friendly, it often saves money too.  Water conservation systems in the home can save up to 90% of normal household water bills.  It is even possible to become water self-sufficient with rainwater tanks and grey water recycling systems.

Losses from natural disasters could triple by 2100: report
Is ‘Peak Oil’ Behind Us?