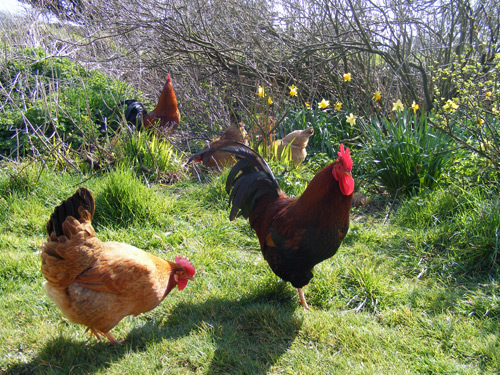 The picturesque Cotswolds of England will soon be using those lovely animals dotting its hillsides to provide power to some of its homes.

A turnkey biogas station made by Alfagy plans to convert agricultural waste, including both feedstock and manure, into electricity.

The plant, which is scheduled to open November 1, is located on the southern outskirts of Cirencester, an ancient Cotswolds town famous for being a thriving mercantile city during the Roman Empire. But Alfagy says the station could reduce at least two of the area’s current imports by using what its people have on hand.

While there have been several projects over the years looking at cow manure as an energy source, this Alfagy plant will use the manure of smaller farm animals, as well as agricultural feedstock.

Participating farmers will deliver corn, wheat, agricultural-plant waste, chicken litter, and pig manure to the station. The farmers will be paid for the biomass and also receive heat for their animal barns, grain-drying bins, and homes.

The agricultural waste is converted into biogas in an anaerobic digester. The station will use a combined heat and power (CHP) system in which one 260-kilowatt CHP unit can perform at a 42.9 percent electrical efficiency, according to Alfagy.

The station is expected to produce about 1 megawatt of electricity per year, enough to power about 350 Cotswolds homes (Cirencester’s population is about 19,000). The station will also create digestate fertilizer.

“This ‘digestate’ is a powerful fertilizer that decreases the average fertilizer costs by up to 100 percent, which is a major cost to farmers and the environment. Normal fertilizer production uses large amounts of fossil fuel [and emits] significant quantities of carbon dioxide, and the finished product is transported over great distances to farmers. Whereas [if] the fertilizer is produced locally at the power plant, there is no necessity in importing it from the U.S.,” Alfagy said in a statement.

Biomass gasification using anaerobic digesters is a feasible option for many areas of South Africa, especially rural areas where large amounts of animal waste and crop waste are produced on site.  Anaerobic digesters are relatively simpe to build and easy to maintain but they do require large amounts of biomass to function (usually more than an average household produces).  Solar power for homes is an accessible alternative energy solution that is rapidly gaining in popularity in South Africa.

Water Rhapsody and Yes Solar Mpumalanga have combined (water and energy are linked!) to offer high quality water conservation systems and solar energy solutions.  Contact us for a free quote on a rainwater harvesting system, grey water recycling system, Atlas Plastics & JoJo water tanks (we are authorised JoJo Tanks dealers in Mpumalanga and Limpopo), green plumbing systems or solar water geyser (made by Solsquare in Germany).  All our water systems are installed by qualified Water Rhapsody consultants and our Solsquare solar geysers are fitted by Eskom-approved solar installers (so that you can claim cash back from the Eskom renewable energy rebate scheme).