With fossil fuel reserves depleting at a rate not many would have imagined in the past, the oil of the 21st century is definitely not what’s buried deep within the earth, but it’s something that falls on the surface as sunshine. Some researchers opine that the earth receives more energy from the sun in just one hour than the world uses in a whole year. The technology to harness the energy already exists and does hold a promise to better the environmental condition of the planet. 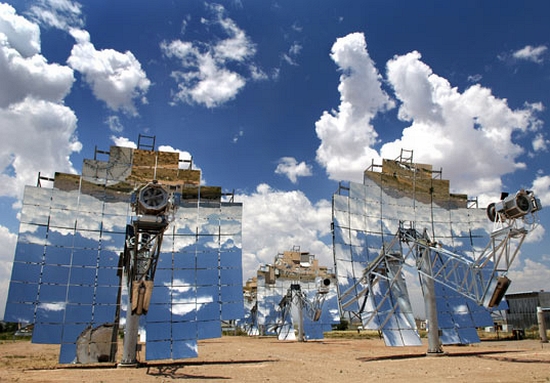 Of all the places where solar panels, both photovoltaic and solar thermal, can be installed, deserts do offer better possibilities. The benefits of creating massive solar projects in deserts include:

Since deserts like the Sahara are mostly barren, the place can easily be used to install solar projects. Research carried out by Greenpeace along with several other groups deduced that deserts are potent enough to meet up to 25 percent of the world’s electricity demands by 2050. In the Sahara desert, with less cloud cover and a better solar angle, one can obtain closer to 83 W/m². The unpopulated area of the Sahara desert is over 9 million km², which if covered with solar panels would provide 750 terawatts of renewable electrical power. The Earth’s current energy consumption is around 13.5TW at any given moment.

With little to no rain, deserts usually remain hot and sunny, making these places ideal for solar energy generation. The sunny climate is suited for both photovoltaic solar installations and solar thermal installations.

Besides combating climate change, desert-based power plants would create jobs and improve the economic development of the local communities. Moreover, since there isn’t much use for the land, local residents and environmentalists are pleased with the solar prospect.

Overshadowing the advantages there are a few limitations of desert-based solar power.

Winds in these areas will blast solar panels with dense dust, which will reduce the efficiency of both the mirrors used in case of solar thermal installations and the photovoltaic modules used in solar PV installations.

Energy generated in deserts will be used in completely different parts of the world. Some percentage of the electricity generated will be lost during transmission.

Electricity produced by even the cheapest, large-scale solar technology works out at $160/MWh. Moreover, transmitting electricity to distant regions will further increase the cost of electricity, which finally will have be paid by consumers who currently get electricity at rates well below $1/watt.

While deserts have plenty of sun, they lack another less obvious but equally indispensable resource for a solar thermal power plant – water. Water is the cooling agent for both photovoltaic and solar thermal installations, without which the plants would be overheated and their efficiency will significantly be reduced.

Rice Solar Energy is planning a solar energy installation in an uninhabited part of eastern Riverside County, California. The system will rely on 4.4 million gallons of melted salt placed in a 538-foot tower. Mirrors around the tower reflect sunlight onto it, heating the salt to such great temperatures that it retains a useful amount of heat seven hours after sundown.

The Mojave Solar Park is a solar thermal power facility currently contracted to be constructed in the Mojave Desert in California. The facility is being constructed by Solel Inc. and is designed to have a capacity of 553MW. Upon completion it will become the world’s largest solar collection facility both in capacity and land size.

Dr. Anthony Patt, a research scholar at the International Institute for Applied Systems Analysis in Austria, estimates that if a fraction of the Sahara, probably the size of a small country, be covered with solar panels, the energy generated would be sufficient to power all of Europe. Dry climate and the high-intensity of the sun’s rays will benefit the $70 billion installation, making it a highly-efficient venture.

This project, promoted by Desertec Foundation, will be built by 20 blue chip German companies, and will be able to generate a whopping 100GW of concentrating solar power. Unlike other solar power plants, which are usually built on a single location, this massive plant would be scattered throughout politically stable countries in northern Africa. The collective output of the plant would be 80 times larger than a similar plant being planned for the Mojave Desert. The power output would be transported across the Mediterranean Sea to Europe on high-voltage DC lines that will finally supply 15% of the energy demand.

BrightSource Energy’s solar project has received a $1.37 billion loan from the U.S. government and will include the construction of three solar thermal plants in the Mojave Desert. The plants, which are being claimed to make the world’s largest solar energy complex, are expected to generate up to 400MW of renewable electric power, which will be enough to power up to 140,000 homes.

The Sahara Forest Project is a renewable solar energy “oasis” slated to be built in 2010. Experts are examining arid sites in Australia, the U.S., the Middle East and Africa that could support the facility. The Sahara Forest Project is a holistic approach for creation of local jobs, food, water and energy, utilizing relatively simple solutions mimicking design and principles from nature.

Space-based solar as an alternative:

The space-based solar power concept is just as attractive as projects being proposed for arid regions. There is no air in space, so the collecting surfaces would receive much more intense sunlight, unaffected by weather. In geostationary orbit, an SPS (solar power satellite) would be illuminated over 99% of the time; such an SPS would be in Earth’s shadow on only a few days at the spring and fall equinoxes; and even then for a maximum of 75 minutes late at night when power demands are at their lowest. Power harvested in space can be transported to earth using microwaves or laser radiation.

California’s state legislators have already given a green light to a space-based solar project. California’s biggest energy utility company PG&E has announced that they would purchase 200MW of solar power that will be beamed from space by 2016.

Moreover, Japan is also planning a $21 billion space solar project that will be capable of generating 1GW of power. The project will be developed by Mitsubishi Electric Corp. and IHI Corp. and will make use of a four square kilometer array of solar panels stationed 36,000km above the surface of earth.

Solar power technology is progressing rapidly.  Some of the disadvantages of solar energy that we are seeing now will disappear in the future.  Quantum dots increase solar panel efficiency by 100%. Many man-made structures such as building walls and rooftops will serve double duty as solar energy collectors.  There are already plans to replace asphalt roads with solar roadways. The cost of domestic solar panels is decreasing and solar systems already enjoy renewable energy rebates around the world.  In South Africa, Yes Solar supplies Eskom-approved solar water heating systems that are installed by Eskom-accredited technicians- so all our solar geysers are eligible for Eskom rebates (up to R8000!).  Water and energy are interlinked; Water Rhapsody supplies and installs environmentally sound water conservation systems that include rainwater harvesting and grey water recycling.  We are authorized JoJo Tank dealers and can supply all shapes and sizes of water tanks.  Contact us for a free, no obligations quote today!