By admin on August 28, 2010 in water conservation, water pollution 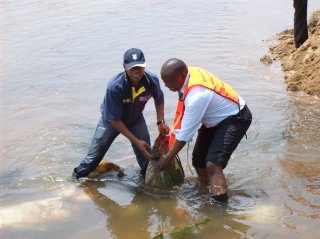 “We are working closely with the South African Police Service and the directorate of public prosecutions to address water crimes that threaten the security of supply to lawful water users,” she told the Agri SA water conference in Johannesburg.

“We will invite you to the launch of the first courts in the near future. I understand that water pollution is one of the areas of great concern for the agricultural sector today.”

It is caused by agricultural practices, mining, industries and urban development.

Unauthorised or illegal water abstraction was also a problem and the department was strengthening its enforcement capacity.

She said the capacity of the Compliance, Monitoring and Enforcement Directorate (Blue Scorpions) had increased significantly, and that 14 water management inspectors had been recruited and trained.

In the 2009/10 financial year, the department had issued 239 directives, 31 of these were “resolved positively” and 14 were pending in court.

The others were in the process of being resolved.

“We will intensify this aspect of our work to ensure that we bring to book all offenders.”

Regulating water use
The minister urged farmers to regulate water use as it could run out.

“Without effective regulation, your water may dry up or the quality may deteriorate significantly.

“The department is very concerned about the impact of deteriorating water quality on our water resource and on agriculture.”

She said the agricultural industry shared concern about the impact of poorly managed sewage systems on the quality of water used for irrigation.

Sonjica said the discharge of waste or waste water into a stream may only be done if authorised by a water-use licence or authorisation.

The department had therefore developed the Green Drop certification programme to address challenges in the municipal waste-water sector.

“Currently we have more than 50 qualified assessors conducting consultative audits on the management of the waste-water treatment works.”

The 2009 Green Drop report found that 203 waste-water service systems out of the 449 (45%) assessed scored better than 50%, measured against the stringent set criteria. At least 7,4% of all waste-water systems were classified as “excellently managed”.

“We are well on our way to meeting the 2010 target of assessing 100% of the municipal waste-water treatment works.”

As occasional acting Water Control Officer (White River Estates Irrigation board) I am amazed at the audacity of many so-called up-standing citizens that think nothing of taking (read stealing!) more water than has been allocated to them.  The cost of water is still relatively cheap but there are many who default on payments to the White River Estates Irrigation Board.  It seems that many people don’t regard theft- and pollution of water as a crime.  While it is commendable that our minister (and her advisers) are recognizing the need for clamping down on illegal water use, the establishment of ‘environmental courts’ is yet another legislative action.  Environmental law is covered by existing legislation which should be invoked where appropriate. More legislation doesn’t mean more law enforcement (this is a common thread for so many other South African laws).  The cost of water will increase drastically in the next few years; perhaps when this essential resource has a higher monetary value then people will start treating it with respect.  There is a way to obtain free water- rainwater harvesting.  Rainwater tanks can store rain water for times of water shortage or for year-round use (depends on water storage capability, rooftop surface area and rainfall).  Water Rhapsody’s Grand Opus rainwater harvesting system is designed to integrate with your existing water supply so that if the rain water is depleted, yo can switch back to the alternative supply.  Another advantage of our rainwater system is that the water tanks can be positioned away from the wall and out of sight (unlike the traditional simple rainbarrels under the eaves).  Contact us for a free quote for rainwater harvesting, grey water recycling, water conservation systems and solar water heating (Yes Solar). We are authorized JoJo Tank dealers in Mpumalanga and Limpopo; we can supply and install the full range of JoJo water tanks and water tank stands.  We are also Atlas Plastics retailers and can supply these high quality water tanks too.

How a solar geyser works (animation)
Solar Over the Parking Lot