Rainwater harvesting is relatively simple in concept but rainwater systems can vary from a single rain barrel or a series of rain water tanks that integrate with the existing Mains or Utility water supply to the building.  In some cases, buildings can become totally self-sufficient when it comes to water, depending on local rainfall patterns, roof or other collection surface area and the number of water tanks to store the rain water.  Many underestimate the quantity of rainfall that can be collected in a single downpour; a series of 10000 litre water tanks or even a few 20000 litre water tanks are sometimes recommended. 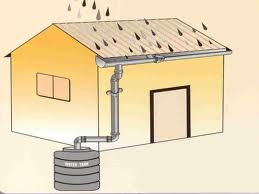 Many cities and states encourage rainwater harvesting, yet few homes and commercial buildings have implemented it. Excuses range from the cost of construction to lack of knowledge. Yet individuals who have incorporated such systems say that integrating water harvesting reduces costs over the long run.“I have not used Utility water since 1994 in my home.” said A R Shivakumar. “With planning, rain water harvesting does not have to be expensive and space consuming.”  Here are his tips:

Multiple rainwater tanks can be built depending on the flow of water. For instance, at Shivakumar’s home there is a 4500 litre rooftop water tank. The excess water from this water tank is allowed to run down rainwater pipes to a 25000 litre sump built under the portico. If these two water tanks fill up, then the extra water is allowed to seep into the ground.

A different set of rainwater pipes from the terrace takes water to a 10000 litre water tank built under the car park. The two underground sumps are interconnected and built at different depths so that water can flow from one to the other. The second sump is also linked to a borewell, which is used when the water in the water tank gets depleted.

The first rainfall has a number of pollutants, so a first flush valve flushes out the dirt. Installing filtration systems before the water goes into the water storage tanks is important.

The traditional one is the sand bed filter, with various beds of sand, gravel and pebbles, which strain out impurities. There are other smaller filters that are more effective and save space as well. For large spaces and heavier loads of water , you will need to install bigger tanklike filters to clean out the contaminants.

Some of the water can be reused as well. For instance, water used in a washing machine can be collected in a separate water tank and after filtering, used to flush the toilet. In cities with heavy rainfall, most rainwater harvesting sumps are not large enough to hold all the water. You can ensure overflow outlets for all underground sumps.

The outlets can be diverted into large plastic drums buried underground with their bottom cut off. Also by not paving or concreting open spaces any rainwater falling onto the garden can percolate into the ground. You can also leave out open pots that will act as birdbaths when they fill up with rain water.