TYNDALL AIR FORCE BASE, Fla. (AFNS) — Every April 22, the Air Force recognizes Earth Day, a time to show support for the environment. 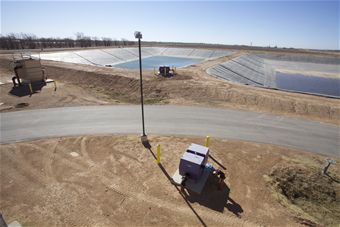 CANNON AIR FORCE BASE, N.M. — These new holding ponds near the wastewater treatment plant here increase the base’s effluent capacity from 190,000 gallons to 9 million gallons. The base will use the water for construction and irrigation. (U.S. Air Force photo/Eddie Green)

This year, the Air Force is focusing on water reduction and reuse. Water projects may not attract many news headlines, but the money and critical resources they save, deserve attention.

“An emerging part of the energy program is water conservation,” said Ken Gray, the acting energy director at the Air Force Civil Engineer Center. “It’s critical because in a number of locations, specifically Texas, where they’ve had a drought, reservoirs are falling drastically and water is becoming an increasingly scarce commodity.”

In fiscal 2012, the Air Force funded 15 water projects that are expected to save two billion gallons of water and $1.07 million a year.

“As with energy projects, a water project is not considered or funded unless it provides a positive return on investment,” Gray said. AFCEC studied utility rates across the Air Force over several years and found the cost of water is going up 10 percent a year, a rate much faster than natural gas and electricity. Rising costs, federal mandates and a dwindling resource has led to an increase in water reuse projects, xeriscaping and leak detection studies.

Col. David Piech is the 27th Special Operations Mission Support Group commander at Cannon AFB, N.M., a base that gets only 14 inches of rain a year.

“In our efforts to be a good neighbor with the folks, and conserve as much water as we can, we’ve taken a lot of steps,” Piech said concerning water conservation.

Cannon AFB has the largest military construction program in the Air Force with 23 projects under construction – all which require water.

“To build a building, you need to compact the soil underneath it so your building doesn’t sink into the ground,” said Scott Hindt, the Cannon AFB energy manager. “Our soil is so dry, we have to spray water on the ground, and then we can compact it. We’re also currently using potable water in two concrete batch plants on base. The concrete is being used to build a new parking apron.”

In a few months, construction trucks will no longer use potable water from fire hydrants. Instead they’ll pump treated wastewater, known as effluent, out of two new basins near the wastewater treatment plant. The basins were constructed last year and increase the availability of effluent from 190,000 gallons to 9 million.

Cannon already uses effluent at the golf course, but must supplement it with non-potable water to meet the demand.

The new basins will provide all of the water needed to irrigate the golf course and could one day be pumped to the softball field and two parks.

Xeriscaping is also proving beneficial at the New Mexico base.

More than 330,000 square feet of xeriscaping around Cannon AFB’s dormitories saves about 8 million gallons of water a year, Hindt said. The use of rocks and mulch in varying sizes and textures along with drought tolerant plants, replaces the need for grass, water and maintenance.

Hindt hopes to get funding to xeriscape an additional 20 acres, saving 60 million gallons of water annually.

At Holloman AFB, N.M., a few hours to the south, water is even more precious with the base relying on five wells and a lake more than 80 miles away to provide its water.

The base constructed its reuse project in 2011.

“Our water reclamation facility takes water from the base wastewater treatment plant and pretreats it to create secondary irrigation for the golf course,” said Lt. Col. Donald Ohlemacher, the base civil engineer. “The project enables us to provide 600,000 gallons of water daily to the golf course with a total of 70 million gallons of water a year.”

The project, which includes a water tank and pipeline, saves $90,000 annually and is expected to pay for itself in five years.

Through these water conservation efforts, the Air Force is saving money and valuable resources base-wide.

All Airmen and their families can save water and money on a smaller scale at home with things like taking shorter showers and turning off water when brushing your teeth.

Other helpful actions include checking for and repairing leaks faucets and toilets, avoiding watering the lawn at midday to prevent high evaporation, capturing and reusing rain water, not watering lawns during droughts and washing only full loads of laundry.

As Earth Day is acknowledged and celebrated around the world, let us consider all the environmentally beneficial activities that we can involve ourselves in and continue doing so every day.  Water conservation is one of the major issues affecting our planet and every step should taken to conserve and re-use water wherever possible.