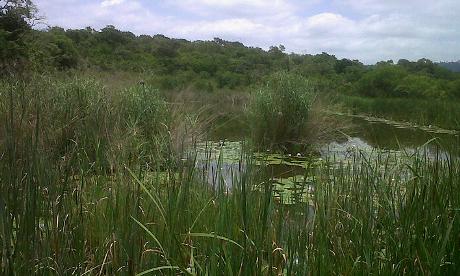 It has been six years since Anglo Coal established a wetland in Mpumalanga to “offset” its encroachment on another of the province’s wetlands. Wetlands cover a mere 2.4% of South Africa’s total 122-million hectare surface area, but the benefits they deliver, from water purification to tourism, far exceed their size.

The assessment reveals that South Africa has already lost about 50% of its original wetland area, and only 11% of what remains is well protected, while 71% is not protected at all.

Mpumalanga is a prime source of much of South Africa’s water, has much fertile farmland and is one of the world’s richest coalfields. This is why, in a first for South Africa, it was stipulated in Anglo Coal’s mining licence for its Isibonelo Colliery in Mpumalanga’s Kriel area, that it would not only rehabilitate the parts of the Steenkoolspruit wetland it would inevitably damage, but that it would establish a new wetland in the area. The project won Anglo Coal a Nedbank green mining award in 2006.

South Africa is a water-scarce country. It has half the international average rainfall of 800mm a year, and has already allocated more than 95% of its fresh water resources. The National Planning Commission warned in 2011 that South Africa had to pay urgent attention to management of water resources or risk having its development slowed.

Wetlands are “water factories” in that they have a direct effect on the quantity and quality of water resources, says Mr Lindley. He says wetlands are also important for social stability, because communities whose water supply is threatened are “not happy people”.

A lack of adequate and safe drinking water played a significant part in service delivery protests across the country, the Water Research Commission said last year.

Monitoring agency Municipal IQ recorded 410 “major service delivery protests” between 2009 and last year, with these defined as protests that lasted longer than a day.

Not only does South Africa have very few wetlands, almost half (48%) of South Africa’s wetland ecosystem types are critically endangered, according to the 2011 National Biodiversity Assessment.

“It’s a political will issue,” says Mr Lindley. “People don’t want to think long term … and our entire economy is driven by water. We can’t exist without water.”

One high water-yield area, the “largely intact” Ekangala grasslands (in which numerous wetlands occur) is in Mpumalanga.

In recent years the grasslands, where the headwaters of three of South Africa’s most important rivers — the Tugela, the Vaal and the Pongola — form, have come under scrutiny from mining houses because they also host coal deposits.

A 23,600ha slice of the area was declared a “protected environment” under the National Environmental Management Act in 2010, making it off limits to any “unsustainable” land use.

However, Mineral Resources Minister Susan Shabangu has granted mining houses the right to apply to prospect in the area and its immediate periphery.

This, says the World Wide Fund for Nature South Africa grasslands programme manager Angus Burns, is an obvious no-no and “a concern” to environmental organisations.

“The periphery is a free-for-all, but it is earmarked for proclamation (under the same legislation).… The take-home message is that this is not about preventing development, it is actually acting in our national interest. Food security and water security depend on it.”

The consequences of damaging and destroying wetlands are a serious threat to a country such as South Africa where water scarcity is a growing national problem.  It therefore is very disappointing that a government minister can allow mining prospecting in close proximity to one of our most important national resources for water security.  Also see: Why are wetlands so important?