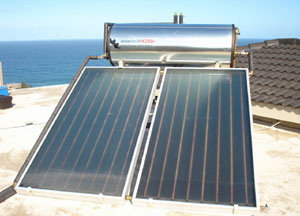 Nedgroup said the project would assist its clients in reducing their electricity consumption and thus their household running costs, while also easing the burden on the national electricity grid.

The insurance group would also pass on Eskom’s solar rebates to clients choosing the solar geyser replacement option, for as long as the rebate programme was available.

After increasing the solar water heater rebate in January 2010, Eskom lowered the rebate in April 2011, but gave no indication of when the programme would end.

Nedgroup said that it would facilitate the rebate process on behalf of the client. It also created a process through which customers could source Eskom-accredited and South African Bureau of Standards-approved suppliers and products for solar geyser installation and maintenance.

Ordinarily, the cost of installing a new solar geyser would be between R15 000 and R35 000. However, Nedgroup Insurance clients would receive insurance cover and the Eskom rebate to access solar geysers to offset the cost.

Nedgroup clients replacing an existing geyser with a solar geyser would be required to cover a shortfall of between R8 000 and R12 000 on the cost of the solar geyser, depending on the size and type of system they chose to install.

“As a bank, we are totally committed to increasing the adoption of environmentally- friendly practices, not only internally, but amongst our customer base. This aligns with Nedbank’s philosophy of integrated sustainability in that it results in economic, social and environmental benefits,” said Nedbank sustainability head Brigitte Burnett.

“This initiative is yet another example demonstrating that sustainability and business development are not opposing values in a business like ours.”

Nedgroup Insurance said it would contribute a portion of its home insurance revenue to the Green Trust, a 20-year partnership between Nedbank and the World Wide Fund for Nature in South Africa. The partnership was said to have contributed more than R100-million to numerous environmental projects in South Africa over the years.

In February 2010, Santam Insurance announced a similar programme where it gave domestic householder clients the choice of replacing a damaged geyser with a solar water heater during the claim process.