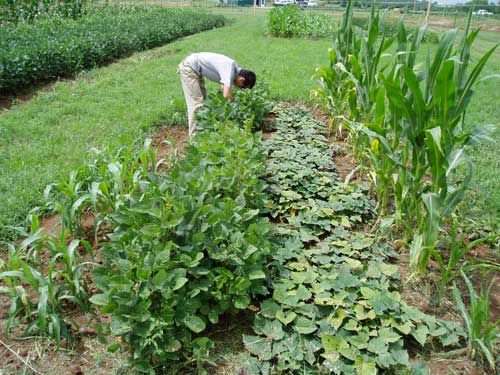 When I posted that a focus on food miles alone risked oversimplifying the local food debate, I noted that there is a constant battle between those who claim that small-scale agriculture could feed the world, and those who argue that increasing the efficiency of industrial monoculture is the only way to go. David Suzuki has a good piece over at the Huffington Post on whether small-scale farming can indeed feed the world, and whether it can nurture biodiversity in the process.

Agriculture has an astounding impact on our Global landscapes, and consequently on biodiversity. Citing a review of scientific literature on small-scale agriculture by Michael Jahi Chappell and Liliana Lavalle, Suzuki claims that as much as 40% of the world’s land surface is taken up by agriculture in one form or another.

Given this astounding reach, and given recent evidence that we may already be experiencing the Earth’s six mass extinction, it only makes sense that we need to both grow more food on less land, and also ensure that the land we do use for agriculture also supports a healthy population of plants and animals. Again citing Cappell and Lavalle, Suzuki suggests that small-scale agriculture may actually be more efficient than its industrial counterpart, both in terms of energy efficiency and, crucially, yield per acre:

Perhaps most interesting is that they also found studies demonstrating “that small farms almost always produce higher output levels per unit area than larger farms.” One of the studies they looked at concluded that “alternative methods could produce enough food on a global basis to sustain the current human population, and potentially an even larger population, without increasing the agricultural land base.”

But just as food miles can be an over-simplification of local food, so too focusing purely on yields and inputs can also be a distraction when it comes to discussing hunger, population and food security. The fact is, as Suzuki also notes, hunger is at least as much about economics and the logistics of food distribution as it is about farming capacity:

This is in part because the global food shortage is a myth. The fact that we live in a world where hunger and obesity are both epidemic shows that the problem is more one of equity and distribution than shortage.

Undoubtedly, many more column inches and research grants will pour into the debate from all sides before we figure out how best to feed a growing population. But it is good to see research to back up what many of us have suspected for a long time—we may not want to trust our future to a few gigantic mega-farms of monoculture crops.