Solar power is generated by photovoltaic cells, but two scientists are exploring different materials that could foster voltage from light’s magnetic effects. 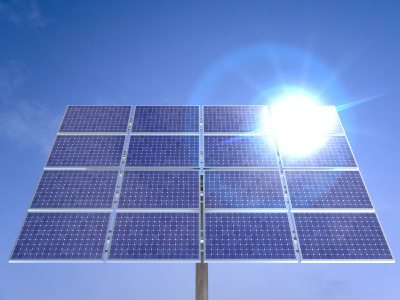 Scientists at the University of Michigan have discovered a new effect from an old property of light, which they say could lead to an “optical battery” that converts sunlight to electricity at a fraction of the cost of today’s photovoltaic cells.

Light has electric and magnetic qualities. Scientists had long thought, however, that the effects of light’s magnetic field were so weak as to be irrelevant.

No so, says Stephen Rand, a professor of physics. Along with doctoral student William Fisher, he persisted in probing the long-ignored weak magnetic field that light produces when traveling through a non-conductive material, such as glass.

The breakthrough – unveiled Friday in a scientific paper in the Journal of Applied Physics – shows that if light is intense enough, it can, when traveling through non-conductive material, generate voltage from magnetic effects 100 million times stronger than earlier expected. Such magnetic effects produce a strong electric field that can be harnessed for electric power production, Dr. Rand and Mr. Fisher say.

“This could lead to a new kind of solar cell without semiconductors and without absorption to produce charge separation,” Rand said in a statement. “In solar cells, the light goes into a material, gets absorbed and creates heat. Here, we expect to have a very low heat load. Instead of the light being absorbed, energy is stored in the magnetic moment.”

He continues, “Intense magnetization can be induced by intense light and then it is ultimately capable of providing a capacitive power source.”

But that doesn’t deter Fisher, who says that new materials (transparent ceramics, perhaps), when combined with focused sunlight, could work at lesser intensities.

“We show that sunlight is theoretically almost as effective in producing charge separation as laser light is,” says Fisher in a phone interview. “It turns out we can in principle develop a voltage along the direction of the beam of light.”

He adds, “Enough sunlight, focused into an optical fiber, could generate electricity – that’s is a simple way to think about it.”

In experiments planned for this summer, the two scientists plan to harness this power using laser light and – after that – sunlight. Fisher says that with improved materials (various kinds of glass, for example), sunlight could produce electricity at perhaps 10 percent efficiency – roughly equal to the rate at which commercial solar cells today convert sunlight to electricity.

“The breakthrough is really on the cost side,” Fisher says. “All we need are lenses to focus the light and a fiber to guide it. Glass is made in bulk, and it doesn’t require much processing, either.”

But the breakthrough is unlikely to be implemented in solar power production for several years, perhaps even a decade, Fisher cautions. Yet he does not foresee any hurdles that can’t be overcome.

The rising oil prices as well as the environmental cost of fossil fuel dependency is likely to drive alternative energy research and development at a increasing rate.  Perhaps green technology, such as the solar power project described above, will become practical in a far shorter time than many think.

South Africa’s power utility, Eskom, has announced that solar water heater rebates will be substantially reduced by the end of April, 2011.  Cost of solar geysers will be as much as R6000 more expensive from 1 May 2011 due to the rebate reduction.