China faces acute environmental and resource strains that threaten to choke growth unless the world’s second-biggest economy cleans up, the nation’s environment minister said in an unusually blunt warning. 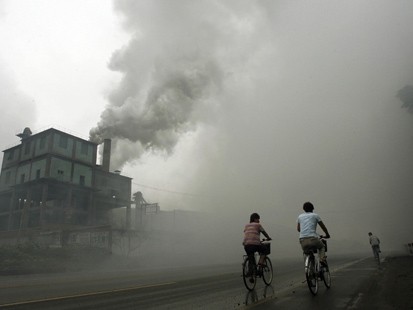 That could give China’s Ministry of Environmental Protection more sway in climate change issues, an area dominated by agencies whose main interest is shoring up industrial growth.

Zhou set environmental worries at the heart of China’s next phase of economic development — a theme in focus at the country’s annual parliament session starting on Saturday.

“In China’s thousands of years of civilization, the conflict between humanity and nature has never been as serious as it is today,” Zhou said in the essay published in the China Environment News, his ministry’s official newspaper.

“The depletion, deterioration and exhaustion of resources and the deterioration of the environment have become serious bottlenecks constraining economic and social development.”

“This is a crucial time for deciding policy, so he’s trying to bring more urgency to getting more teeth for his ministry by making people grasp the huge challenges,” said Yang Ailun, the head of climate and energy for Greenpeace China, an advocacy group, speaking of Zhou’s essay.

Chinese officials often promote the need to maintain fast economic growth to pull hundreds of millions of citizens out of hardship. But Zhou said prospects for growth could be threatened unless smoggy skies, polluted rivers and reckless exploitation of mine reserves are taken much more seriously in setting policy.

“If we are numb and apathetic in the face of the acute conflict between humankind and nature, and environmental management remains stuck in the old rut with no efforts in environmental technology, there will surely be a painful price to pay, and even irrecoverable losses,” said Zhou.

China is now the world’s biggest emitter of greenhouse gases from burning fossil fuels and other human activities that scientists say are causing global warming. It is the world’s biggest polluter and biggest consumer of resources across a range of other measures.

In 2009, nearly 20 percent of the length of China’s monitored rivers and lakes had pollution worse than Grade 5, making the water officially unfit for even irrigating crops, according to government statistics.

To double the size of the economy between 2000 and 2020 and keep environmental conditions at levels met in 2000, China will have to improve its efficiency in using resources by 4 to 5 times compared to 2000 levels, said Zhou, citing findings of the Chinese Academy of Sciences.

China has repeatedly promised to clean up distressed rivers and lakes and smog-filled skies. But it often fails to match rhetoric with resources and the will to enforce those vows.

A researcher from the Ministry of Environmental Protection’s own policy institute said China would remain focused on industrial growth for many years yet and “more patience is needed to achieve green development.”

“Pursuing economic growth will remain China’s development goal and task for a long time to come,” the researcher Yu Hai wrote in the latest issue of Environmental Protection, the ministry’s Chinese-language policy journal.

In January, more than 200 children living near battery plants in eastern China showed elevated levels of lead in their blood — the latest such outbreak to prompt an outcry.

“Voices across society urging concern for environmental health are rising, and this is having a negative effect on social harmony and stability,” said Zhou.

A BIGGER SAY IN CLIMATE CHANGE?

To counter such threats, he proposed strengthening his ministry’s ability to monitor and curb pollution, including taking a bigger role in greenhouse gas emissions.

That will include assessing projected greenhouse gas emissions from proposed new projects, such as factories.

“The Ministry of Environmental Protection can use this tool to get more say in climate and energy policy,” said Yang, the Greenpeace China analyst, referring to Zhou’s proposals.

China’s insatiable need for energy and resources has even reached Africa.  African countries such as Zimbabwe have been targeted for their mineral resources and agricultural land.  Nobody can blame China for wanting maximum growth but, as the above-mentioned Minister notes, it cannot pursue development at all costs; the environment will not cope.  It is encouraging that the Chinese government has recognized the requirement for more eco-friendly development.