By admin on March 12, 2011 in environmental issues, sustainable agriculture 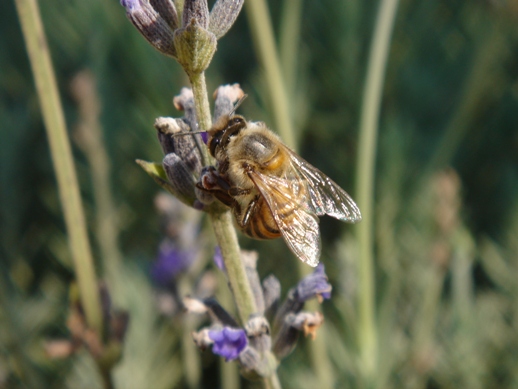 Mass deaths of bee colonies in many parts of the world may be part of a wider, hidden threat to wild insect pollinators vital to human food supplies, a U.N. study indicated on Thursday.

Declines in flowering plants, a spread of parasites, use of pesticides or air pollution were among more than a dozen factors behind recent collapses of bee colonies mainly in North America and Europe, the U.N. Environment Programme (UNEP) said.

That cocktail of problems — rather than a single cause killing bees in hives that might be easier to fix — may also threaten wild bees and other insects vital to pollinate crops such as soybeans, potatoes or apple trees.

“It’s the tip of the iceberg we’re seeing with the honey bees,” Peter Neumann, a lead author of the study of “global honey bee colony disorders and other threats to insect pollinators,” told Reuters.

“There is not an immediate pollination disaster but the writing is on the wall,” said Neumann, of the Swiss Bee Research Center. “We have to do something to ensure pollination for future generations.”

The study said there were also reports of bee colony collapses in China, Egypt and Latin America.

“There are some indicators that it is becoming a global issue,” he said in a telephone interview.

BIRDS AND THE BEES

Bees and other pollinators such as butterflies, beetles or birds are estimated to do work worth 153 billion euros ($212.3 billion) a year to the human economy — about 9.5 percent of the total value of human food production, it said.

Recent estimates of the contribution by managed species, mainly honey bees, range up to 57 billion euros. In the United States, over two million bee colonies are trucked around the nation to help pollination every year.

“Of the 100 crop species that provide 90 per cent of the world’s food, over 70 are pollinated by bees,” Achim Steiner, head of UNEP, said in a statement.

“Human beings have fabricated the illusion that in the 21st century they have the technological prowess to be independent of nature. Bees underline the reality that we are more, not less, dependent on nature’s services in a world of close to seven billion people,” he said.

The report urged a shift toward ecological farming, less dependent on insecticides and more resilient to threats such as climate change. Food prices have hit record levels and are one factor behind uprisings in Egypt or Tunisia.

UNEP said farmers could be given incentives to set aside land to “restore pollinator-friendly habitats, including key flowering plants” as part of a shift to a “Green Economy.”

Neumann also urged more research into insects, noting that charismatic animals such as polar bears won most attention as victims of global warming. “Insects are usually not cute but they are the backbone of ecosystems,” he said.

Being stung by an African bee is not pleasant (as happened to me yesterday) but it should be remembered that bees attack perceived threats instinctively (I unknowingly stood too close to their hive) and that they pay the ultimate price, dying after stinging.  In South Africa, bee populations have also declined, probably mostly due to agricultural pesticides.  It’s ironic that many South African farmers pay beekeepers  for the pollination services and then the bees are killed by insecticides meant for pest species.  As with health and the medical/pharmaceutical world, agriculture needs to be released from the grip of agro-chemical companies and return to more eco-friendly practices.