Years of river mismanagement have made the massive floods in Pakistan, which have inundated a fifth of the country and rendered millions of people homeless, worse, experts have said. 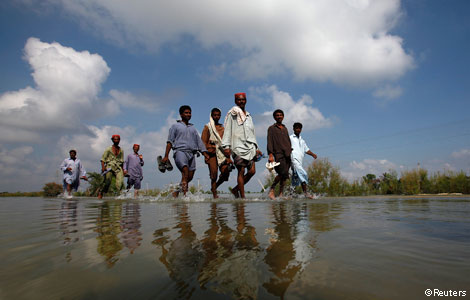 The Indus River is considered as Pakistan’s lifeline, and since the partition in 1947 people have expanded the canal system to cater to the needs of the ever increasing population by diverting the river flow wherever it is needed to support agriculture.

“Because humans have sculpted the river and the surrounding natural floodplain and wetlands for farming and other needs, there are fewer floods, but when they hit, they are far worse,” Mustafa added.

Asad Sarwar Qureshi, a water resources expert at the International Water Management Institute (IWMI) branch in Lahore cited that due to consistent exploitation river channels have been left with much smaller area to absorb the rainfall.

“There’s not very much space in the river channel to absorb all the rainfall. We need to get it back into shape, so that it can carry its original capacity,” Qureshi said.

He pointed out that wetlands along the river’s course were used to take up some floodwaters, but because of increasing needs those areas have been converted to farmland.

The National Geographic Channel news said that experts are of the view that allowing the river to flood more regularly, and naturally, could help temper the floods and make them more tolerable,

“They need to give the rivers room to expand. Not along the whole way, but they should restore some of the wetlands along the way,” said Mustafa.

Managing Pakistan’s floods is a delicate balance between giving the river more room, and building barriers to protect people and their land, said Qureshi.

The importance & function of wetlands is well-known by ecologists and hydrologists but the average person has very little knowledge on the subject.  Wetland degradation is commonplace worldwide but especially in poor developing countries.  People with little or no education cannot understand why they shouldn’t plant crops on river banks and marshes.  The grazing of livestock in sensitive riverine areas further exacerbates the problem.  Where a river system is subjected to these practices over long stretches and for long periods, the natural flood abatement ability of the river system is gradually weakened until it fails when above average precipitation is experienced. Climate change compounds the problem and flooding risk.  Education and guidance is the key; governments should send trained agricultural extension officers into the rural areas to ensure subsistence farmers do not encroach on the wetlands.  Unfortunately, the lure of fertile alluvial soils is too strong for poor farmers.  The problem of wetland degradation in Mpumalanga and Limpopo is evident when one drives through the Eastern Lowveld.  However, the consequences are usually felt most by the rural communities living in neighbouring Mozambique; this emphasizes the need for better river management on a local, national and international level.