President Jacob Zuma and the Minister of Environment and Water Affairs, Buyelwa Sonjica, have been charged under Section 151 of the National Water Act in a bid to get them to answer for rampant pollution in the Hartbeespoort area. 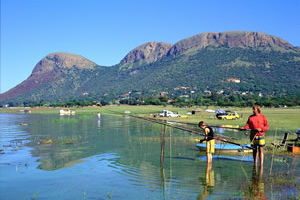 Captain Enoch Legoete at first refused to open a case against Zuma, saying he hadn’t committed a crime.

Criminal charges about water pollution are not new, but Barlow is taking the fight to a new level by filing complaints against the president.

Communities, civil society and ratepayers’ associations are frustrated by a pollution problem they say is increasing while water, the country’s most precious resource, is in a critical state.

“If we carry on like this in five years we will have no drinkable water left.”

Juta was later suspended over the collapse of sewerage plants.

Eddie Barlow said the Crocodile River was being polluted “at a devastating rate”. Also, none of the sewerage plants in Madibeng was functioning properly and between 10 and 12 million litres of raw sewage were flowing into the river at Brits.

In May, TauSA filed charges against Sonjica and the Minister of Agriculture Tina Joemat-Pettersson and Mining Minister Susan Shabangu in Brooklyn, Pretoria. It said mines used 7 percent of the country’s water and were responsible for 75 percent of water pollution.

The DA’s spokesman on water and environmental affairs, Gareth Morgan, said all indicators pointed to a decline in water courses and charges for water pollution were being laid more often.

“Departments are even charging each other,” he said.

“The Department of Water Affairs has laid charges against Madibeng municipality.”

Morgan said sewerage infrastructure was in an appalling state.

“About 30 percent of sewerage plants could fail any day. There is a lack of maintenance, which means untreated sewage flows into water courses.”

The pollution of Hartbeespoort Dam was a good example of the state of water systems because it was the collecting point of all sources of pollution, Morgan said.

Acid mine drainage is also a threat. Mariette Liefferink, of the Federation for a Sustainable Environment, said acid mine drainage was flowing into the Tweelopies Spruit, which flowed into the Crocodile River and Hartbeespoort Dam.

“It’s toxic and radioactive sludge. The situation is extremely serious.”

Unfortunately, politics plays a big role in how a nation’s natural resources are cared for (see Climate Change & Politics).  It’s ironic that the current South African government purports to represent the nation’s poor majority yet it is slow to react to water pollution issues that tend to affect the poor the most.  More affluent people can afford water purification and back-up water supplies (stored in water tanks) that comes from other sources such as boreholes and rainwater harvesting.  South Africa’s sewage plants are overloaded and our water security issues are acute. One of the solutions is to reduce the quantities of  grey water that combine with black water to form sewerage.  Greywater recycling systems reuse gray water for irrigation and toilet flushing (greywater is full of nutrients that plants need).  Stormwater runoff reduction also reduces the pressure on our sewage systems.  An easy way to reduce stormwater in urban areas is to harvest the rainwater off rooftops- the water is directed to water storage tanks for household use.  Rainwater harvesting and greywater recycling not only help save our environment but saving water means saving money too!

Unplug Your Laptop Forever in 7 Steps
Power the Future: Harnessing energy from the sun-baked deserts