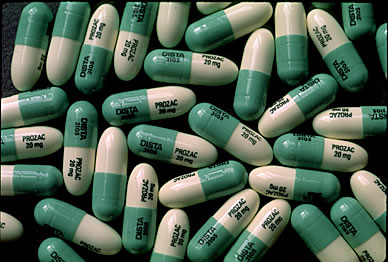 For better or worse, scientists have found that minute concentrations of fluoxetine, the active ingredient in Prozac, are killing off microbial populations in lake water.

When antidepressant pills get flushed down the drain, they do more than create happier sewers.

Scientists in Erie, Pennsylvania, have found that minute concentrations of fluoxetine, the active ingredient in Prozac, are killing off microbial populations in the Great Lakes.

Traces of antidepressants such as Prozac have been found in both

drinking and recreational water supplies throughout the world, in quantities experts say are too dilute to affect humans but which have been found to damage the reproductive systems of mollusks and may even affect the brains of animals like fish.

Killing off bacteria might seem like a good thing. “Your immediate thought is, ‘well, that’s good, because they’re not supposed to be there anyways,” said Mercyhurst College microbiologist Steve Mauro, whose team found fluoxetine in low doses in water near Lake Erie’s beaches. “But what about all the other bacteria that are supposed to be there and part of that ecosystem?”

Treating clean lake water with similar strength doses killed off E. coli and enterococcus bacteria, both of which can cause serious infections in humans.

The fluoxetine found in Lake Erie is at very low levels—about one nanogram per liter of water, Mauro said. “It doesn’t appear to be at a level that would be harmful to humans,” or invertebrates, for that matter, though Mauro suspects that fluoxetine combined with other chemicals could be having a cumulative effect on the lake’s ecosystem.

But what’s puzzling is where the drug is coming from. Fluoxetine is thought to enter waterways after it passes through the body and is excreted in urine. And pill users who dispose of unused pills down the sink could be adding to the problem. Wastewater treatment plants generally don’t filter out the chemical.

But near Presque Isle State Park in Lake Erie, where the water samples containing fluoxetine were found, “there’s no particular fallout. We don’t have a direct sewage outfall located anywhere near the beaches,” Mauro said. That means the fluoxetine is likely spread out all over the lake, he added.

Mauro and colleagues presented their work Monday at the 111th General Meeting of the American Society for Microbiology.

We have to be careful of what water we drink because of the multitude of possible contaminants- both chemica and pharmaceutical as will as biological.  “The Pill” has been blamed for oestrogen in our water but a new study suggests otherwise.  The ideal situation is to obtain one’s own drinking water; a practical way of doing this is via rainwater harvesting and storing the rain water in water tanks.  Although rainwater is pure before it reaches your roof, it may pick up contaminants from your roof and gutters; we therefore recommend filtering rain water for drinking purposes.  Read water filter types: choose the right one.